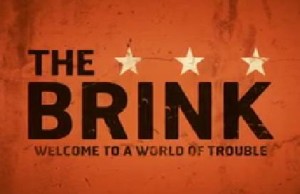 Doomsday has been postponed! No one is going to push the Big Red Button just yet since THE BRINK gets to hold the calamity at bay for another season as HBO announces a sophomore season for the show.  So, the Benibib Brothers, Roberto and Kim, have got to find more ways for Secretary of State Walter Larson (Tim Robbins) and Foreign Service Officer Alex Talbot (Jack Black) to save the day.

In the political satire, if you haven’t been watching the 10-part premiere season, we find a volatile situation in Pakistan. Nuclear armament could be the result if Secretary of State Larson can’t talk hawkish President Navarro, (Esai Morales) and the Secretary of Defense (Geoff Pierson) from launching WWIII. What is needed is someone on the ground to help the situation, thus Talbot comes into the picture. A little support from strategic air strikes can’t hurt either if Tilson can keep his mind off drug-running long enough. Also to help anyone who is getting into the series late is our First Impressions post of the series and a clip or two.

One thing this writer was not aware of regarding THE BRINK is that, according to Wikipedia, that the show was conceived that each season will follow a different crisis somewhere in the world involving the same main characters. That puts an interesting twist in to the mix. So evidently the Pakistani incident gets resolved in Season One and President Navarro and his Cabinet will send Talbot and Tilson into a different hot zone next season. Do we feel comfortable letting Talbot & Tilson on the front lines of this? Shouldn’t we leave this to James Bond or someone more qualified? Well, it wouldn’t be political satire if we didn’t. If you like THE BRINK check back with HBOWatch as we will offer up a Mid-Season Report and a Season Wrap-up in the weeks ahead. The last episode of the premiere season debuts  08.23.

Well, we have BALLERS and THE BRINK each seeing another season in 2016. Now, how about TRUE DETECTIVE? Does it join them for its third season?