As a result of new data reported by Vulture and covered by WinterIsComing, it has become clear that Game of Thrones season 3 ranks just behind The Sopranos season 5 as the most viewed HBO season since 2004. The fantasy series also ranks above other stellar HBO classics such as The Wire, Sex and the City and Rome. 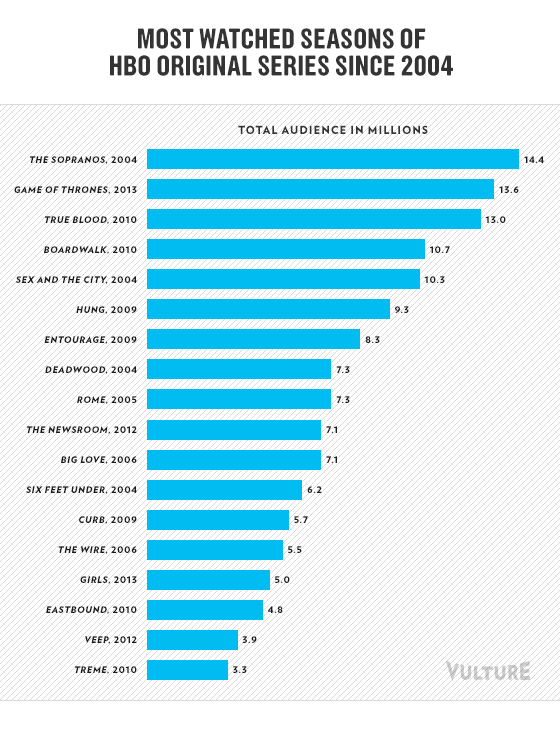 It is clear from this chart that many HBO shows which are currently airing are some of the most viewed, something which bodes very well for the future of these shows and potential new shows. Of the charted shows, Game of Thrones, True Blood, Boardwalk Empire, The Newsroom, Girls, Eastbound & Down, Veep and Treme are all still going strong, with at least one more season each confirmed. These comprise over half the charted shows.

Game of Thrones has recently become one of the most viewed HBO shows overall, but it is interesting to note that the third season of True Blood and first season of Boardwalk Empire do not rank too far behind. True Blood in particular looks to be hot on the heels of Thrones, and may even overtake it at some stage. Josef Adalian of Vulture makes an interesting point on the overall statistics:

It’s worth noting here that, while GoT has passed True Blood and is drawing more viewers than the final seasons of The Sopranos, new technology makes it tough to compare tune-in figures. HBO GO had only been around for a few months when True Blood hit its 2010 peak, and it didn’t even exist when Tony Soprano ruled HBO. Video on demand also wasn’t as widely available as it is now back during the era of The Sopranos, nor were DVRs. That makes the numbers forThe Sopranos all the more impressive: As big as GoT is, it’s nowhere near the monster hit its Sunday predecessor was (nor has it amassed anywhere near the Emmy haul of David Chase’s show). At least not yet.

After airing such a game changing episode last Sunday, it wouldn’t be surprising if Thrones season 3 surpasses Sopranos season 5 next week as the most viewed HBO season.  If not, there’s always season 4!  If it does, you can be sure we at HBOWatch will let you know.