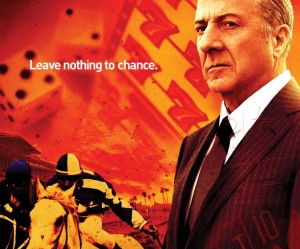 With only one episode out of the gate, HBO’s Luck looks to be making a run for the finish line in 2012.  Speaking with IAmRogue.com Jill Hennessy, who plays Jo in HBO’s new series Luck, said that season 2 would most likely begin filming as soon as February of 2012!  While this isn’t an official confirmation of Luck: Season 2 we see it as a great sign.  Here’s what she had to say about that possibility and working alongside acting legends Dustin Hofman and Nick Nolte:

Finally, my last question is about your role on HBO’s new show, Luck. Can you talk a little bit about shooting the series and do you share a lot of scenes with Dustin Hoffman, and Nick Nolte?

Hennessy: “We shot thirteen episodes for the first season, and we’ll probably resume filming in February. I had a scene with Dustin, and I had a scene with Nolte, but predominantly I do most of my scenes with horses, and with Jon Ortiz (Fast & Furious), who’s this genius Brooklyn actor. It’s a killer series, man. Michael Mann (Miami Vice) is the producer, and directed the pilot. Every episode is a film. It takes us the same amount of time to shoot an episode of Luck that it took us to shoot the entirety of Roadie. Dustin Hoffman is just a joy to work with. He’s such a generous, beautiful human being. He’s got this talent for making people feel really good about them selves. So, it’s just been amazing! I get to work with some of my favorite actors. Nick Nolte was sweet as hell, and so great to work with. He’s good with horses, too; we had this beautiful scene with a gorgeous horse, and other actors that I’ve admired for years like Joan Allen (The Contender) and Denis Farina (Midnight Run) and Richard Kind (A Serious Man). It’s a joy. Plus, it shoots at the Santa Anita Racetrack, in Los Angeles. I only shoot for like five days out of the month, so I come back to New York, and I get to live here in the city. I can raise my kids, take them to school everyday, go to all the school events and stuff, and still work on an amazing HBO show like that. So I’m pretty lucky.”

Again this isn’t an official confirmation from HBO itself but a series with actors this big has to be sure they’ve blocked out enough time with everyone needed on set.  And it looks like, with a little Luck, it’s already headed in that direction.  Let’s hope Jill’s suspicions are correct.

Did you watch the special sneak peek at the pilot episode of Luck this December?  What did you think?  Will you continue watching?  Luck premieres on HBO proper January 29th, 2012 at 9PM.  Sundays are back on HBO!