Debuting on Sunday, February 11 is the return of an Alan Ball series to HBO and the return of a dramatic hour series to intrigue us. Are you interested in HERE AND NOW? Are you going to watch it live? It is upon us and this post gets us up to speed before the premiere. HBO tells that on the surface, the Bayer-Boatwrights of Portland, Ore. are the model of a progressive, multiracial family. Greg is a respected philosophy professor and author; his wife, Audrey, is a former therapist turned conflict-resolution consultant for middle and high schools. Greg and Audrey have three adopted children, Ashley, Duc and Ramon, and a biological daughter, Kristen. But as Audrey prepares for Greg’s 60th birthday party, deep cracks begin to appear in the domestic façade, threatening to upend their very way of life, and they are eventually forced to take Ramon to Dr. Farid Shokrani, a Muslim psychiatrist with demons of his own. Here is what the trailer tells us:

The first takeaway is that this seems to be Alan Ball striving for social relevance in today’s chaotic world scene. The mode of transport through that landscape is this multi-faceted family. And you cannot nestle in with a family without exploring the whole family dynamic. So while there may be ‘state of the union’ commentary a family story plays out as well. What we hope for is a good balance between both sides of the tale. I mean, regardless of affiliations, do you want your show bogged down with political punditry? I don’t, but nor do I want a snappy family story paralleling This Is Us. Without an advance screening, I guess the verdict is still out.

Here is a closer look at the family: Greg (Tim Robbins) and Audrey (Holly Hunter) adopted three children from different countries and backgrounds in an effort to create a family that reflects the multicultural potential of the country. What? What happened to adopting less fortunate children just to give them a chance of a better life? He sees his family dynamic as just a social experiment? We know this family has to show dysfunction and we get it right off the bat in Greg.

Now meet Audrey but be warned, in my opinion, this clip doesn’t define her character as well as Greg’s clip. It is clear though that she is one harried woman for sure.

That leaves the children. We start with Ashley, Duc and Ramon and some people in their respective lives. The Colombian-born Ramon (Daniel Zovatto), who’s starting a relationship with Henry (Andy Bean), a barista, begins therapy with Dr. Farid Shokrani (Peter Macdissi) after hallucinogenic encounters with the numbers “11:11.” Duc (Raymond Lee), adopted from Vietnam, enjoys the fruits of a lucrative career as a “motivational architect,” but his celibacy troubles the family and Liberian-born Ashley (Jerrika Hinton), who runs a retail-fashion business, begins to struggle with her identity as an African-American woman in modern-day America and is finding more and more reason to shake up her marriage with her husband, Malcolm (Joe Williamson).

The descriptions & clips don’t hide the fact that some kind of affliction befalls Ramon. The mystery is of course just what exactly is going on. Is Ball slipping in some supernatural bent (remember, TRUE BLOOD was one of his) or mental illness (which seemed to be in question at times, if I remember correctly in SIX FEET UNDER, another Ball series)?  What we have seen of Ashley so far clearly reflects the times her ethnicity is facing. As for Duc? He seems the most put together so far. Lastly is biological daughter Kristen (Sosie Bacon), the youngest child at 17, who chafes at her banal life and heritage, especially compared to her more exotic siblings. She gets something here the others don’t – a clip, just because she’s “painfully white.”

That leaves us with descriptions of the first few episodes:

As Audrey Bayer (Holly Hunter) puts the finishing touches on her husband Greg’s 60th birthday party – a milestone Greg (Tim Robbins) is loath to celebrate – cracks begin to emerge in their progressive, multiracial family. Ramon (Daniel Zovatto), the couple’s Colombian-born son, is having unexplained, recurring encounters with the numbers “11:11.” After the troubling incident at the birthday party, Audrey and Greg take Ramon to a therapist, Dr. Farid Shokrani (Peter Macdissi), who has an unlikely and unexplainable connection to the young man. Written and directed by Alan Ball. 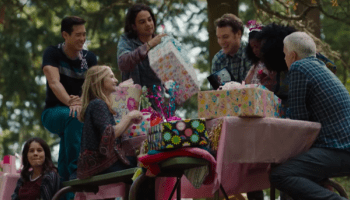 Ramon (Daniel Zovatto) and Shokrani (Peter Macdissi) explore the possible psychic connection between “11:11” and a photograph in the doctor’s office. Kristen (Sosie Bacon) and Ashley (Jerrika Hinton) run into trouble. Duc (Raymond Lee) gets good news about his self-help manuscript, but his mood is dampened by the publisher’s request. Audrey (Holly Hunter) is enlisted to help break up a politically incorrect new society at school. Disturbed in part by a medical diagnosis, Greg (Tim Robbins) loses his cool in the classroom. Ramon crashes a family meeting. Written by Alan Ball; directed by Uta Briesewitz.

Greg (Tim Robbins) gets detoured in the wilderness on the way to an ethics convention. Audrey (Holly Hunter) finds herself in the media crosshairs after a hate crime at school. Following a mountain-bike race with best friend Malcolm (Joe Williamson) and their pals, Duc (Raymond Lee) reveals the secret to staying in control, a credo that’s tested by Carmen (Fernanda Andrade), a fellow life coach. Haunted by a painful memory, Shokrani (Peter Macdissi) looks for unconventional help to get him through a wedding. With help from Ashley (Jerrika Hinton), Kristen’s (Sosie Bacon) crush on a predator comes to an end. Audrey ends an otherwise bad day with a rare good night with Greg. Written by Mohamad El Masri; directed by Uta Briesewitz

So, consider yourself prepared for HERE AND NOW. We know early buzz has said this is not Alan Ball’s best. We will judge for ourselves. Will you join us? If so, the time is here, the time is now.