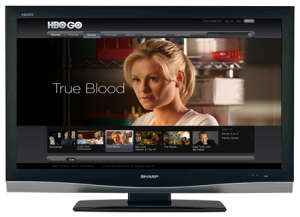 HBOGo has been a tremendous hit for the network with millions of HBO subscribers choosing to receive their premium content via mobile device anywhere in the world.  But HBO isn’t limiting itself to just your iPhone or iPad.  In a conference call with shareholders, CEO Jeff Bewkes said that HBO’s online TV anywhere application would soon be available not just to web browsers and mobile devices, but on network enabled TVs as well as video game consoles as well.  Much like Netflix has done, HBOGo may eventually come bundled standard with new televisions or become available as a simple download via a firmware update, Nintendo’s Wii Shop or Xbox LIVE.

HBOGo has seen much success with Bewkes reporting that various incarnations of the software have been downloaded more than 4 million times since their launch.  HBO Go has expanded the amount of content available through the service, including every episode of every HBO original series so it’s no wonder people are scrambling to download the programs.

No timeline was given for the launch of these no iterations of HBOGo but with the success of the browser and mobile versions of the app we doubt HBO will want to waste any time.