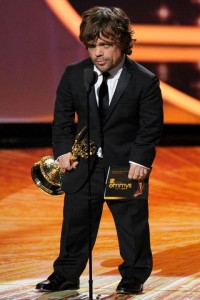 HBO’s Emmy® wins this year include:

2 Emmys® for “Game of Thrones,” including Outstanding Supporting Actor in a Drama Series (Peter Dinklage) and Outstanding Main Title Design.

1 Emmy® for “A Child’s Garden of Poetry”:  Outstanding Children’s Program.

1 Emmy® for “Cinema Verite”:  Outstanding Single-Camera Picture Editing for a Miniseries or a Movie.

HBOWatch congratulates all of the winners last night (especially Peter Dinklage- we love you, Tyrion!).  HBO continues to dominate television awards all over the world.  Until next year!