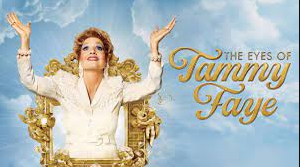 There was a time when Tammy Faye and her husband Jim Bakker were very well known. Though preachers and religious leaders have existed since the beginning of time, Tammy and Jim came into prominence at the moment when the national discourse and politics converged to give conservatives and religious people increased visibility and power in the United States. The greatest tool for preachers has always been the airwaves, first radio, and then television. When the medium turned the gospel into a visual as well as an audio sensation, some personalities were better suited for prime time than others. How could television audiences ignore the colorful and outrageous Tammy? 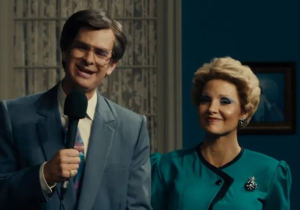 As someone who has never been religious, I was only vaguely familiar with the Bakkers. I only knew that there were scandals attached to their names and that Tammy liked bright outfits and bold make-up. It is precisely this color, both in personality and in looks, that made me aware of Tammy. The Eyes of Tammy Faye tries to go beyond the tv personality, beyond the LOOK of Tammy. Who was she? What did she care about? What did she truly believe? If the film is to be believed, Tammy was a true believer, someone who wanted to bring the word of God to people and welcome them into the flock. She loved her husband and her family. She stood up to religious people she admired in order to defend the inclusion of LGBT people into her sphere.

Ultimately, however, the movie doesn’t quite succeeded in getting under the surface, despite the genuine talents of the people involved. Like so many biopics, we see the series of important moments in Tammy’s life: her first meeting with Jim, the building of their empire, the estrangement that grows between them, the scandals that plague them. It feels like the film is checking off a list of biographical data points, rather than giving us some insight into Tammy’s motivations. It is possibly too sympathetic to Tammy, painting her as a bystander in her own life, a passenger in the journeys mapped by her husband Jim and rival preacher Jerry Falwell (an amazing turn by the unrecognizable Vincent D’Onofrio). I simply have a hard time accepting her lack of guilt or agency in the events surrounding her ministry. A more effective film would perhaps delve more deeply into both the greed and hypocrisy surrounding the prosperity gospel, as well as the effects of this greed on the masses who tune in. A Face in the Crowd famously showed us what drives a preacher of this sort, and what happens to the national discourse and to audiences who believe in him. This film lacks that ambition, focusing for the most part on the personal marriage troubles of the Bakkers. 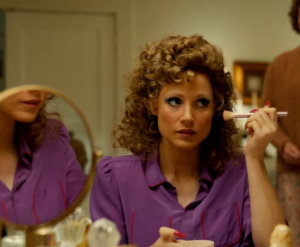 Despite these flaws, Jessica Chastain is compelling and sympathetic in her turn as Tammy. The best thing about The Eyes of Tammy Faye is the way that it makes us understand why audiences connected so deeply with the woman. There was a warmth and sweetness that radiated from her, and people responded to it. She was a showstopper, not necessarily because of her talent as a performer, but because of the seemingly genuine emotion that drove her broadcasts. For his part, Andrew Garfield is perfectly cast as Jim: greedy, insecure, fake in the same way that Tammy seemed so genuine. People, lots of them, fell for Jim’s shtick, but to those of us who are not believers, he always came across as a used car salesman. Garfield nails his smarmy persona.

The Eyes of Tammy Faye is based on a well-received documentary of the same name. It’s worth checking out for the performances of its talented cast, and also to get a view, however limited, of the colorful Tammy.

The Eyes of Tammy Faye debuted on HBO Saturday, January 29 and can be found on HBO and HBO Max.