While Don’t Worry Darling doesn’t live up to the promise of being Olivia Wilde’s second feature, one heaped with lavish imagery and mystery as evidenced in the trailers, nor the gossip page buzz driven by cast antics at Venice, it is perfectly serviceable as a one-off commitment of two hours, though this enjoyment is largely in the moment. The issues stem from the fact that once digestion has begun, lingering questions surrounding the point of it all can dampen the experience of having enjoyed it at all. 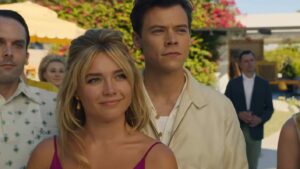 The comparisons with Stepford Wives, Truman Show, Inception, The Matrix, and even Westworld have already been well documented, and for good reason. There is no sense in retreading that territory, really, except to say that they are justified. The fact of the matter is that you have seen this before. This isn’t anything new. So, when all is revealed at the beginning of the third act, is there anything left to be surprised by? The lifting of the veil was always going to be one of a few worn options either way, so the very nature of the film’s journey means that the desire impact if only going to be softened when all is revealed. If you are happy to make peace with it, then that’s fine. It is what it is, but then the dwelling shifts to the why of it all. What was the motivation? What was the preferred outcome for those in control? And indeed, why does any of this matter? Why should you care?

Thankfully, Florence Pugh is a fine distraction from the obvious problems beneath the surface. And Harry Styles, for that matter, though less on the performance front. And Olivia Wilde. Oh, and Chris Pine. It’s almost as if every time the audience may start to righfully question something, Wilde is readily there, clicking her fingers and saying, ‘Hey! Look over here! Flo and Harry are going at it again!’ 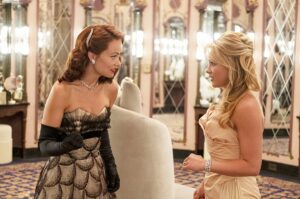 So, that’s how it starts. Idyllic California desert around what seems to be the pre-Cold War nuclear testing period. Post-war, pre-space age. The men partake in work relating to the mysterious Victory Project, with housing and lifestyle forming parts of it’s overall ideal. Meanwhile, the women stay at home cleaning, gossiping and marinating steak. Cocktails are freshly shaken ready for 5PM. Whether this is mean to be some sort of scathing criticism of now outdated gender roles is hard to say, partly because this half of the film is so enjoyable to the senses, and partly because of how the film ends. If it is, however, in it’s insinuation that this is the life that women actually wanted for themselves, it’s perhaps the most on-the-nose finger point you’ve ever seen. Nothing in this entire film is layered with any sort of subtext. Then, when it invites you to unpick and have some of your questions seeminly answered, it actually just creates more, and more, and more.

Adding little to the ‘nothing is as it seems’ genre, Pugh’s character, Alice, begins to have suspicions, weird things happen, and when she tries to state a case to her husband, his employed, everyone around her – she is written off and forced back into her prefab and very well decorated box (she’s a woman! What does she know?!)

In short, Don’t Worry Darling is nowhere near as clever as it thinks it it, or wishes it was. It is well shot, well directed and moderately entertaining. Were it not for Pugh however, it would have fallen completely flat.