Antlers follows the story of a young boy, Lucas (Jeremy T Thomas), dealing with the aftermath of a supernatural occurrence in the local mines involving his father and younger brother. Directed by Scott Cooper (Crazy Heart, Black Mass) the film delivers on some gutsy blood and gore, but it lacks in exploring the films more interesting themes and underdeveloped characters. 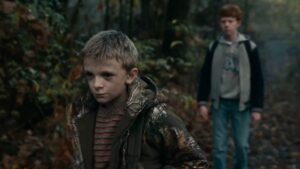 Set against the backdrop of beautiful Oregon scenery we are first introduced to Frank Weaver (Scott Haze) who is making meth at a makeshift lab in an unused mine. His 7-year old son Aiden waits patiently in the car. Inexplicably, some kind of demonic creature attacks Frank and his co-worker and after hearing his fathers pained screams young Aiden ventures into the mines himself, only to also meet the beast therein. Three weeks later and we accompany Lucas as he collects roadkill to take home and we learn that his father and brother are locked in the attic of their home. Lucas’ neglected appearance attracts the attention of his teacher who seeks to get to the bottom of what is going on at home and the whole town becomes affected by the beast from the mines.

As far as monster flicks go, this one really gets it right in terms of the gnarly blood and gore. There are some truly disgusting moments in Franks transformation from man into beast which will be tough to stomach for the more sensitive viewer. This however, helps it to stand out a bit amongst similar films, where it dares to really push the audience into staring at some mangled, gooey corpses of his victims that are almost impossible to identify in places. However, the film really lacks in exploring those deeper themes. For example, Lucas who is severely neglected and has been fending for himself for the last three weeks has not been picked up by relevant child protection authorities and only catches the attention of his teacher when he reads out loud a rather disturbing story he ‘made up’ in class. In actuality, as Lucas’ father is a meth dealer, this neglect would have been going on long before now and he would have already been on the radar of the schools and local authorities when it comes to child protection, especially as the mother is out of the picture and the father is most likely to be claiming some kind of 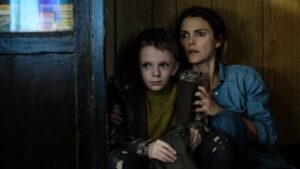 benefits. Either way, we are expected to believe that until now he has been going unnoticed in his filthy clothes and malnourished physique. Similarly to this, the channels in which the teacher, Julia, (Kerri Russell) follows to help Lucas border on inappropriate. She follows him out in public and then takes him for some ice cream where she pries on his private life. She visits his home on her own. She holds his hand, hugs him and treats him like he is her responsibility – she even says this at one point. There would be so many other people involved in this boys life at this point where she wouldn’t be the default guardian for him. He would have been taken into the custody of child protective services long before that and she wouldn’t have been in a position to take a vulnerable young pupil out of ice cream. It’s just not believable. But in a world where a man has inexplicably been possessed by a deer-like devil creature – what is believable?!

The moment where we find out in some really lazy dialogue what the creature is, from an indigenous member of the local community, is a really weak pay off for sticking with the story until now. He just so happens to know exactly what this creature is and exactly how to kill it. No one has even seen this creature properly yet, least of all him, so how does he know that’s what it is? Why is everyone so happy to accept that there is a demon possessing their town? All except Sheriff Paul Meadows (Jesse Plemmons), the life blood of the film, who is the only one who seems to be thinking and acting logically. However, even he doesn’t take much convincing and it never really becomes very clear what this creature is, why its there and what it is trying to do. All we know is that it has an insatiable hunger that is never satisfied and that he likes the taste of the townsfolk the most. 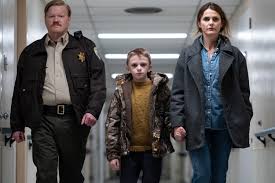 Lucas losing his father and brother to such horrific circumstances isn’t given the due care and attention it deserves, rather it is brushed aside for the sake of some other underdeveloped storylines. Also, the fact that Julia was abused as a child serves no purpose other than to make it seem like she can spot the signs of neglect more than anyone else? But you don’t have to be a genius to look at a severely underweight child with holes in his t-shirt to figure out he isn’t being cared for properly at home. The film would have carried a lot more emotional weight had it been given an extra 30 minutes or so to develop the characters and these complex themes rather than taking the easy way out and under cooking the whole thing.

That said, there is enough in its 99-minute runtime to keep you entertained and if you are a fan of super gore then you will be satisfied with the sporadic, gratuitous moments the film allows.

Antlers is now available to stream on HBO Max.