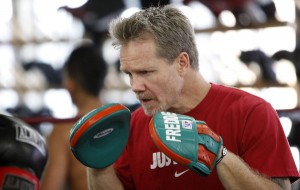 From an Official HBO Press Release: ON FREDDIE ROACH, the all-new cinéma-vérité series from renowned filmmaker and Emmy® nominee Peter Berg, launches its six-episode season FRIDAY, JAN. 20 (9:30-10:00 p.m. ET/PT), followed by other episodes on subsequent Fridays at the same time, exclusively on HBO.  Executive produced by Berg (“Friday Night Lights”), the HBO Original Programming presentation is a co-production of Film 44 and Atticus Entertainment.

The unscripted show focuses on Freddie Roach, who owns and operates the famed Wild Card Boxing Club in Hollywood, where he has produced a host of world champions.  This intensely personal look at the world-famous boxing trainer chronicles his life and career against the backdrop of Parkinson’s disease, an ailment very likely linked to his own boxing past.

A native of Dedham, Mass., Freddie Roach has an extensive amateur boxing background.  He fought as a professional under the tutelage of legendary Hall of Fame trainer Eddie Futch, ending his professional boxing career in 1987 with a record of 41 wins and 13 losses.  Upon retiring, Roach became Futch’s apprentice.

In 1992, Mickey Rourke financed Roach’s first gym, the Outlaw Boxing Club.  He has gone on to train more than 20 world champions, including Manny Pacquiao, Amir Khan, Oscar de la Hoya and Mike Tyson.  Roach has been honored five times as Trainer of the Year by the Boxing Writers Association of America and has been inducted into the World Boxing Hall of Fame.  On Dec. 6, 2011, he was elected to the International Boxing Hall of Fame.

Earlier this year, the U.S. Olympic Committee announced a unique partnership with Roach in an effort to ensure that America’s top amateur fighters have access to the finest training in preparation for the 2012 Olympic Games in London.  This partnership will create a program allowing up to ten Olympic hopefuls to train at the Wild Card Gym, which has become synonymous with world-class performance.

The 51-year-old bachelor lives next door to his mother, just a few miles from Wild Card.

Here are the descriptions and playtimes for January’s episodes:

Introduction to the life of Freddie Roach, boxing trainer and Parkinson’s patient.

A routine day at the Wild Card Gym is suddenly thrown into chaos.