Just when HBO’s LUCK was finally just a memory it pulls us back in. HBO has just been slapped with a lawsuit this past week. Of course, it is over the 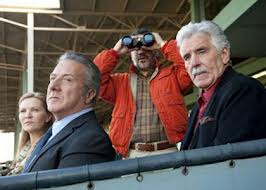 deaths of three horses that occurred at the Santa Anita Park doing filming of the HBO series starring Dustin Hoffman and Nick Nolte among others.

Here are the specifics. The lawsuit was filed by Barbara Casey, a former employee of the American Humane Association (AHA), who alleges that HBO and producers, Stewart Productions, mistreated horses on set and both parties along with the AHA participated in a months-long abuse cover-up. Casey was a longtime veteran of the organization who served as a liaison between the animal rights institution and Hollywood production houses. She was on set during the filming of LUCK. She states in the lawsuit, filed in Los Angeles Superior Court that the AHA observed drugged, underweight and/or sick horses routinely used for work on the show and the misidentification of horses by producers so that animal safety reps couldn’t track their medical historie 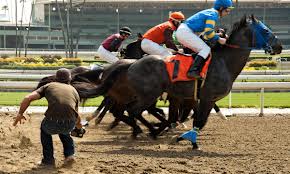 s easily. Casey also says HBO & Stewart Productions wanted to save time and money and that rather than cooperate with AHA, the production companies pressured the organization to allow them to violate the AHA’s animal safety standards.

Eventually, the deaths were news items and a hot topic for animal rights activists and that furor led to the cancellation of the drama. The other part of the lawsuit is against HBO and the AHA for wrongful termination. Casey claims she wanted to contact law enforcement about the mistreatment, but that AHA fired her for threatening to speak out in January 2012. The lawsuit states that the  –

[box] “AHA bowed to political and financial pressure and refused to report the Production Defendants’ conduct to the authorities. AHA terminated Plaintiff’s employment in order to prevent her from reporting the violation of animal abuse.”[/box]

[box] “We took every precaution to ensure that our horses were treated humanely and with the utmost care, exceeding every safeguard of all protocols and guidelines required of the production. Barbara Casey was not an employee of HBO, and any questions regarding her employment should be directed to the AHA.”[/box] 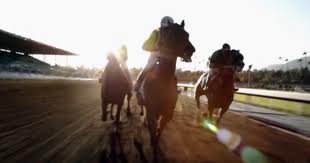 HBOWatch will do its best to keep you informed about HBO’s run of bad LUCK.