Heading into the election of our lifetime, LeBron James and his business partner, Maverick Carter, invited former President Barack Obama to do a COVID-friendly edition of The Shop. With the background of a barbershop behind President Obama and Maverick and LeBron at their respective homes, the three men enjoyed casual conversation, similar to that in previous episodes, but with a much clear agenda: the 2020 election.

Things did start nice and light, though. President Obama shared that life in a pandemic wasn’t all bad on his end. He celebrated that his family stayed healthy and that they all (daughters included) were at home together. He continued to share the fun part of parenting young adult women (and, yes, I’m being sarcastic), is that, to us, he’s the first black President, Barack Obama, but to them, he’s just their dad and he’s not that interesting. But, none the less, it seems like the time with his daughters and wife were deeply enjoyed.

We also learned that Obama and LeBron have a good enough relationship to where LeBron and Chris Paul can call him at any time of the night. Apparently, at midnight, LeBron and a handful of other NBA players called the former President. But, it was for a great reason. Exhausted from the continued killings of black Americans, these men solicited the advice and guidance of Obama. His biggest suggestion was to create an atmosphere where there can be on-going dialogue and implementation, since, we know, the deaths around black people aren’t an anomaly. He encouraged them to use their platform, but also, to think beyond the 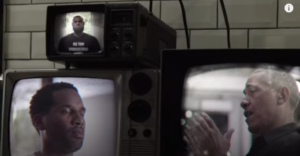 Obama celebrated the history of black athletes and their ability to use their platforms for the social movement. Things slowed down for some time, but now LeBron and this new generation possess a fearlessness and excitement, which is clear. Other athletic organizations followed their leadership and it’s worth highlighting and celebrating this. These men knew their reach and took advantage of it.

This conversation led to voting and the election. And that’s where things really shined for me. There was so much excitement in 2008, but now, it seems as if it’s a task, and more people highlighting what political parties don’t do, versus how to utilize our connection to these parties for our own advancement. Obama shared that, the biggest obstacle comes when frustration turns into cynicism and people begin to believe that things can change. So many people want instant gratification or resolution, but that’s not how it works. Racism is rooted deep and the lingering psychology is very much alive. The remnants of Jim Crow remain, which also means, the resolution can’t happen overnight. The hope is to acknowledge what needs to happen, commit to that injustice, work at it,  find a resolution, and then prepare to address what’s next.

We also got to hear from LeBron about life in “the Bubble”. He Talked about being away from “normal life”, and what it was like for those 96 days. He dealt with a lot of mind battles, including, surviving this time and missing life, combined with the urgency around the civil unrest in the community. And I must say, the NBA, led by Chris Paul and him, did a lot more than the NFL, and at least used their platform to spread light and information.

The episode is available for free at https://www.hbo.com/the-shop.