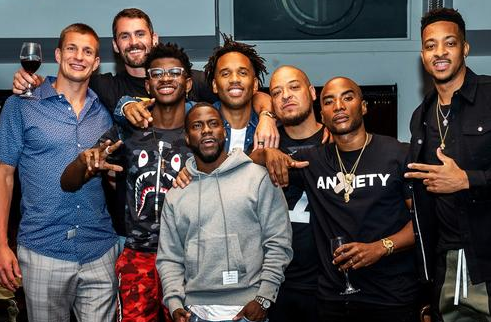 The Shop: Uninterrupted came on this past week and while LeBron James was absent, the list of guests made the episode one for the books. Set in the traditional barbershop setting, this week we had Maverick Carter, Kevin Hart, Rob Gronkowski, Kevin Love, CJ McCollum, Charlamagne tha God, Lil Nas X, and Paul Rivera on tap. The thing that works for this show is the backdrop of a barbershop and the symbolism thereof: openness, unfiltered outbursts and uninterrupted conversation! And usually, that checks out. Opinions are dynamic and this week was no different.

One of the more interesting conversations surrounded the idea of parents being successful and wanting more for their kids. Charlamagne tha God (Radio Personality) led the conversation around the balance of inspiring kids to have drive when they have a privilege their parents didn’t have. Kevin Hart (Actor/Comedian) shares the disconnect between his generation and children. Rob Gronkowski (New England Patriots) shared that all his siblings were professional athletes and attributed his success to his parents being real and investing in their talents.

Lil Nas X (Rapper) got to share his perspective on breaking the Billboard’s Hot 100 record. He talked about not being on the country charts and celebrating the fact that he had a mega-record. And then things took a turn for the worse. While I can appreciate the idea of having an open conversation around sexuality and Lil Nas X coming out, asking him “why did he feel necessary to say it?”— was a question we could do without in 2019. Watching him explain himself in a room full of heterosexual men with Kevin Hart at the forefront was bad TV.

Lil Nas X announcing that he was reared in a setting that taught him to hate himself, while being confronted by a comedian who said he would beat his son over the head with a dollhouse because that’s gay was underwhelming. Kevin Hart minimizing Lil Nas X coming out with a “so what” was insensitive. Newsflash Kevin, he did it because of people like you! People like you who pretend to not know what homophobia is, while endorsing toxic thinking. This exchange was one of the lowest moments of this series. Knowing that, traditionally, the black barbershop isn’t a safe space for many queer men of color because of its amplified toxic masculinity, placed me on defense the entire time, and I never fully shook that moment. Fortunately, Paul Rivera (Marketing Executive) was able to use the conversation to pivot and discuss people coming out in professional sports.

Kevin Love (Cleveland Cavaliers) cited the stigma around sports locker rooms. Charlamagne tha God minimized the context of “coming out”, which shows there’s still work to be done in his court too. I’d say for future references; this isn’t the space or ideal set of people to engage in a value-add conversation around queerness in the entertainment business. These men aren’t allies in a way that enhances the conversation. If anything, it left a poor taste and outlook for anyone involved in the exchange.

The conversation continued with addressing censorship in comedy. Kevin Hart took charge of the conversation citing that he hasn’t been charged with changing his comedic methods under the current conditions. I’d say I agree with that. He’s okay with staying who he is without apologies. Charlamagne tha God chimed in, offering a great perspective. He’s known for his provocative commentary but was able to understand the humanity in passing judgment and being as authentic as you can. It’s a blend and I’d say he does it well day in and day out.

Kevin Love also talked about seeking help for anxiety. Charlamagne tha God shared his bouts with “irrational anxiety”. CJ McCollum (Portland Trailblazers) talked about the obsession and stress of being an athlete. This was great folks! Open dialogue around mental health, seeking treatment, and the shared connection these athletes share was pure magic. Having, what many would consider, the world at your fingertips and still not feeling at peace and balanced is a conversation that should be on-going. Fame and success don’t erase these lows. If anything, they feel amplified.

In closing, this episode had the potential to be memorable. Instead, it had too much Kevin Hart and not enough LeBron. His presence and ability to shift the conversation was missed. I look forward to seeing the series, with Hart absent and with James front & center. Check out the clip that’s made its way around the internet about Lil Nas X coming out.