The following announcement came too late for us to get it to our “What’s On” post for December so we wanted to draw your attention to an HBO Sports documentary uploading soon. It is UNDER THE GRAPEFRUIT TREE: THE CC SABATHIA STORY coming TUESDAY, DECEMBER 22 at 9:00pm ET/PT on HBO. Here is an official press release regarding it:

UNDER THE GRAPEFRUIT TREE: THE CC SABATHIA STORY features the deeply personal story of New York Yankees pitcher Cartsen Charles (“CC”) Sabathia, Jr., using as its foundation behind-the-scenes footage from his final season with the Yankees in 2019. In his own words, Sabathia 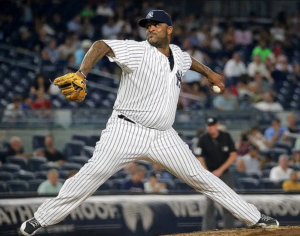 narrates his story, which began in Vallejo, CA, where the future pitching great first honed his skills throwing grapefruits from a tree in his grandmother’s yard. As the highs and lows of his last season are chronicled, Sabathia looks back on his legacy as one of the game’s preeminent pitchers, as well as the profound challenges that shaped him, including his longtime battle with addiction that came to a head in 2015 while playing for the Yankees.

“I couldn’t be more grateful for the chance to give viewers an inside look into my career and to share my unfiltered story,” said Sabathia. “I struggled for a long time with alcohol addiction and anxiety, which I pretty much hid from everyone I knew. It’s my hope we can inspire athletes and non-athletes alike to open up and let their friends, family and teammates know that there is a path through this. You are not alone.”

During his decorated 19-year Major League Baseball career, Sabathia compiled an impressive 251-161 win-loss record, winning more games than any other pitcher has in the sport this century. Making his major league debut with the Cleveland Indians in 2001, Sabathia spent his first seven-and-a-half seasons with the Indians, winning the 2007 Cy Young Award along the way. He led the Indians to the 2007 American League Central Division title, and then, after being traded in 2008 to the Milwaukee Brewers, he helped the team make the playoffs for the first time in 26 years. With the Yankees, Sabathia led all of Major

League Baseball in wins in both 2009 and 2010, winning a World Series ring in 2009. He was also voted the 2009 American League Championship Series Most Valuable Player. Sabathia was named an All-Star six times, and in August 2017, he became the all-time American League leader in strikeouts by a left-handed pitcher. On April 30, 2019, he became the seventeenth pitcher in MLB history to reach 3,000 strikeouts and the third left-hander to do so.