Yes, you read that right. Here is the official word, followed by my opinion about increased sports talk coming to HBO. 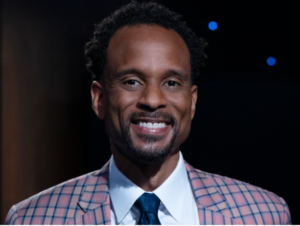 HBO has ordered GAME THEORY WITH BOMANI JONES, a weekly, late-night series starring Emmy-winning, sports journalist and commentator Bomani Jones, that will break down timely issues playing out in the world of sports. Production will take place in New York starting in 2022.

Jones is currently a contributor on HBO’s “Back on The Record with Bob Costas” and has appeared in the HBO Sports documentaries “The Battle for Tobacco Road: Duke vs. Carolina” and “Runnin’ Rebels.” Jones has spent over 15 years in sports media, most notably at ESPN. As the co-host of “Highly Questionable” and “High Noon” and the podcast “The Right Time with Bomani Jones,” Jones has enriched sports commentary in his own unique style.

“Bomani is one of the most unique journalists working today,” said Nina Rosenstein, executive vice president of programming, HBO. “He’s someone who gets that sports stories are often about race, politics, economics and gender and sees a wider view that goes beyond what happens on the field. We are thrilled to be able to work with him and know that ‘Game Theory’ will deliver provocative, insightful and funny stories that you don’t hear too often in popular media.”

“This is, literally, my professional dream, to have a show like this one on HBO,” said Jones. “I’d feel that way with anyone behind it, but working with a top-notch group like Seth, Stu, Todd, Adam and Nina has me more excited than I can express. We have a chance to do something that hasn’t been done before, and I can’t wait to share our work with the world.”

“I have been dying to work with Bomani for years now,” said Adam McKay, executive producer. “He’s one of the sharpest and funniest truth tellers anywhere in the sports world.”

I understand the business enough to know that Bomani Jones signed a contract with WarnerMedia and HBO’s parent company needed to utilize the talent in some meaningful form or fashion for what it’s paying. That is why Jones got the screentime in Costas’ return. I agree; don’t waste the asset. How quickly that 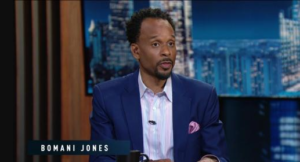 escalated into his own show and we await how it is presented. Bomani Jones does offer a different take on sports in general. His show could offer something different. If you look at REAL SPORTS WITH BRYANT GUMBEL, it offers a number of personal stories of athletes and has a pulse on sports trends & culture. Not that it doesn’t speak about the business of sports but not like Jones. As for BACK ON THE RECORD WITH BOB COSTAS, that show understands the business but will only appear quarterly. Jones must want more screentime than that to delve into the issues in sports. So, perhaps GAME THEORY WITH BOMANI JONES does fill a niche. Jones clearly looks at all details of the daily business that takes place in sports across the board. He analyses and understands it.

My last point is that perhaps HBO knows something we don’t. Perhaps they are grooming Bomani Jones to be the next big sports talker for its brand. REAL SPORTS after all is in its 26th season and Gumbel is 73 years old. Maybe, retirement is part of the dialog? Perhaps and if so, Jones, at 41 years old, would be already in place. Costas, by the way, is 69 years old. In the end, Bomani Jones could continue to add a different voice to the sports conversation and HBO has taken the opportunity to let him do so. We look for GAME THEORY WITH BOMANI JONES from HBO Sports sometime in 2022.