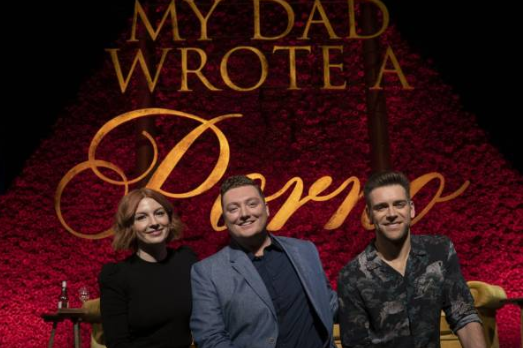 Okay, so I just watched the aforementioned comedy special and it just wasn’t what I thought it was. There were some laughable moments to be sure, but just not what I expected.

All right, I understand all that, but what I was hoping for was more of an introduction to the whole concept for those of us unknowledgeable of the whole “Belinda Blinked” series of erotic novels dear old dad whipped up. The stage show was more of a staged podcast in front of a lively audience; just another installment for all of the followers and not a welcoming intro to the uninitiated. As every character was mentioned the crowd cheered as they were quite familiar with the unintentionally silly sex lives of these characters. And they were having fun. In fact, it was a boost to the proceedings to have live audience participation which was, of course, impossible as a podcast.

To me, if you weren’t caught up in the hubbub then you sat there feeling as if you were left out of the full joke. Perhaps if they would have introduced us to the characters better, perhaps if they had read some of the best of the most poorly written scenes to highlight this global comedic hit for those on the outside it would have appealed to me more. 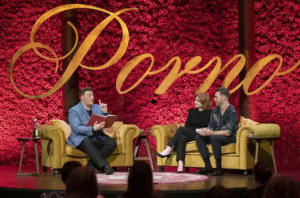 But I will say that Jamie, James & Alice really knew how to milk all the humor and awkwardness out of the short “lost” chapter they did present. Jamie’s delivery of the text was right on and most, but not all, of the commentary banter from the other two (scripted or extemporaneous), was sly but had it gone on for more than that hour it would have lost me as too repetitive. I think that is the bottom line as I look back on it. The routine is slight so it is best in short bursts; an hour of it clearly is enough to explain the premise and cite examples of how well Rocky Flintstone can butcher the language & female anatomy.