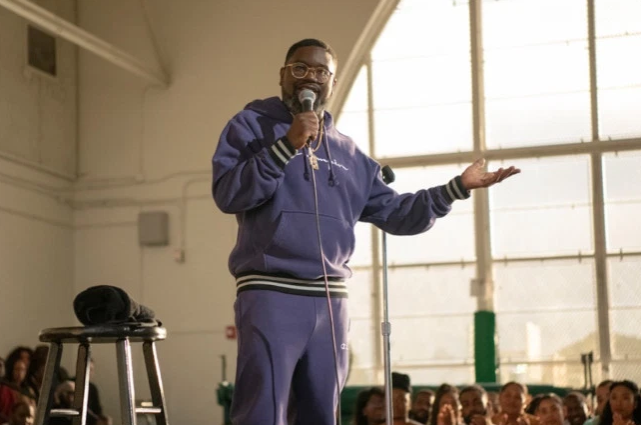 Here we go with Lil Rel Howery! We know him as Quentin in INSECURE but of course, he has had his own show, REL and a part in the movie GET OUT and more. In fact, right now he has listed a half dozen projects in post-production for 2020. A busy guy but not too busy for a stand-up gig. That gig is a nonconventional comedy routine at that…sort of.

The bulk of his gig is the typical “let me tell you about my family” trope. A number of comedians draw from their family experience and Howery is no different here. But, of course, the way he tells it is what works. What makes the stint unconventional is the venue choice. It changes it up instantly and if you are like me you focus on at the onset. We do not find us in a dimly lit theater or auditorium with banks of lights and laughter out of the darkness. Instead, we are dead center in the gymnasium of Susan Miller Dorsey Senior High School in Los Angeles, as the sun sets outside the large windows. 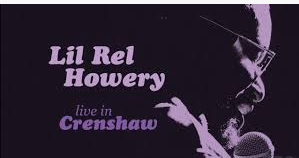 At first, I thought that Howery was taking it back to his home community in South LA but the guy, according to his bio and the special, is not even from the region. He works in LA but is from Chi-town. Go figure; I guess the reason for the visit then must to be to connect to his people – the black community of and there is no better place, I guess, then on Crenshaw. They can relate to the story of his family that he unspools.

He gives us the story of a wayward uncle’s funeral and how the family called him out to pay for it all because he was now rich on Hollywood money. He pays for a memorial in Chicago, a casket, and expenses to get it, himself and his grandmother to the burial plot in Mississippi. What a crazy bit it is complete with voices for all the characters. This sure is funny to Lil Rel because he pauses every few sentences to laugh at his own shit. You can’t tell whether he is laughing at what he just said or laughing at the next segment he is about to tell. He just laughs a lot at himself.

Oh, the audience is hootin’ & hollerin’ too and it is all in plain sight. The gym is well lit and each and every person in the bleachers and seats are seen. So are the camera teams moving around the make-shift stage. Hell, if the camera angle is just right you can see people standing outside taking it all in. It all takes a few minutes to take in this high school pep rally feel but it wears off enough to enjoy the stint.

Though it takes a moment to get into the gimmick Lil Howery can hold your attention and carry you through his family adventures. LIL REL HOWERY: LIVE FROM CRENSHAW, which debut last Saturday, November 23 now can be found across HBO’s platforms.