Well, where to begin? This is the first comedy routine I’ve seen in a long while that was raw, and vulgar. But I had the vulgarity at a lot higher level that what Daniel Sloss delivered. I imagined going into the special that it would be a lot worse; it is not the biggest shock comedy I’ve ever heard. Also, going in I just assumed, because of what publicity I read or heard about this routine, was that the ‘X’ of the title stood for Sloss being an X-rated shock jock. It doesn’t, it stands for the fact that this is his tenth stand-up special. Well, for me it was his first because if it doesn’t play on HBO I don’t see comedy acts.

If you are like me you aren’t really phased by the swearing, you get to a point where you can just ignore it and listen for the joke. Well, Daniel Sloss makes it tough because he also, being Scottish, speaks with the traditional accent that those folks have. So, when he gets rolling on his banter & his brogue thickens and the cusswords fly it is hard to follow his thought. He wasn’t even speaking full sentences at times. 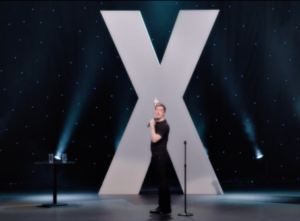 Yeah, he lost me a couple of times. So, if you didn’t know of Sloss’ style going in or if you weren’t like me and did mind the blue language then you’d have a hell of a time getting through this and you’d miss a good message by the end. Yes, this routine has a solid message by the end; a lot of comics don’t have that. I‘m hesitant about calling it standup really; it comes across as more as performance art. He doesn’t lend to coming across as spontaneous and riffing and improvising with the crowd. It is a scripted piece that he sticks too. That includes a scene or two with Nigel the character in his head that handles cataloging his opinions (old & new) and his memories. An adult Pixar Inside Out jab.

I don’t want to expose his message here for it is for him to tell but his lead into it all are topics like gender equality, toxic masculinity, sex education and feminine hygiene products. He has a strong concept of our caveman instincts, societal perceptions and some other heady thoughts before his main message hits in the last 15 to 20 minutes of his set. If you can sift through all the monkey shit he flings at you and wait for the big kernel of truth at the end you’ll be wowed!

DANIEL SLOSS: X debuted on HBO Saturday, November 2 at 10:00pm and now appears across HBO’s platforms. Check it out and let me know what you thought of it below.