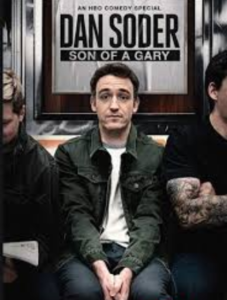 First off, from promotional copy comes this – Taped at New York City’s intimate Bowery Ballroom before a sold-out, live audience, Dan Soder: Son of a Gary – the comedian’s first HBO comedy special – showcases Soder’s down-to-earth approach to being a thirtysomething New Yorker (via Colorado) and how dark humor is the only way to get through life’s curveballs. Bringing his good-natured humor to such themes as family trauma, dating in your thirties, and hitting puberty in the days of dial-up internet, Soder offers his sharp observations on a number of topics, including drug dogs at the airport, the customer service generation, fake fights in the shower and what it’s like to have an alcoholic dad, but a fun one.

For me, DAN SODER: SON OF A GARY was a fun gig to watch. Though we have had comedians, as of late, delve into to their issues and illnesses and make humorous insights & jokes from them Soder doesn’t quite do that. His promo material takes up the travails of having an alcoholic father and he does bring it up in the routine, but it only serves as the underlying reason for why he is up on that stage to begin with but it is not the main topic of discussion.

Essentially, Soder is saying that he is doing standup because of abandonment issues and needed validation; here is why; and here we go; accept me or not, but this is my gig. And, in short, it works. He is out to talk about his life and all the underlying tones his issues bring to the table in his life and in his comedy, all pinned to the undertone of the dad who drank himself to death when this performer was only 14. Not only does he walk us through that, but he does so with a handful of lively voices slipped in here and there. Not only does he do it but he does so via odd connections like professional wrestling, old dial-up internet and the potent edible mushrooms he enjoys. He had a good old time doing it and so did the audience and so did I on HBO.

I think you need to catch DAN SODER: SON OF A GARY, which debuted SATURDAY, DECEMBER 07 and can be found across HBO’s channels and HBONow/Go.