Amy Gravitt, executive vice president, HBO Programming has dropped some news to make Hader & Hooli fans happy because she tells us that both half-hour shows BARRY and SILICON VALLEY will return in 2019. I guess that means the debut of the Bill Hader/Henry Winkler/Stephen Root led BARRY went well since it gets a Season Two. And it will mark a big Season Six for that bunch from Pied Piper in SILICON VALLEY. Here is what Gravitt has to say about both shows: 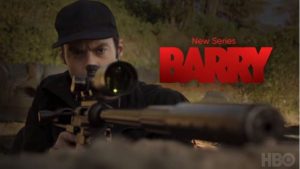 “While BARRY has delighted audiences with its deft interplay of comedy and drama, SILICON VALLEY remains as brilliantly and frighteningly prescient as ever. We’re thrilled that these two smart, funny shows are returning for another season.”

Created by Alec Berg and Bill Hader, BARRY launched its eight-episode first season March 25. Hader stars in the title role as a depressed, low-rent hitman from the Midwest who finds himself drawn into a community of acting students while on a hit job in LA. He wants to start a new life, but his criminal past won’t let him walk away. Can he find a way to balance the two worlds?

The current season of BARRY, which concludes May 13, was hailed by TV Guide as “wildly original and sensationally entertaining,” while NPR termed it “the best new comedy on television”; the Washington Post described the series as “terrific” and Entertainment Weekly called Hader “phenomenal.”

A collaboration between Mike Judge and Alec Berg, the Emmy-winning and Golden Globe-nominated SILICON VALLEY returned for its eight-episode fifth season March 25. The show takes a comic look at the modern-day epicenter of the high-tech gold rush, where the people most qualified to succeed are the least capable of handling success.

Among the critical raves for the current season, which concludes May 13, the Atlantic called the show “exciting” and “hilarious,” while the A.V. Club said SILICON VALLEY has “one of the best comedic ensembles on television”; Slant Magazine hailed the show for “gut-busting comedy,” and Vulture described the new season as “a very smartly designed software upgrade.”

One quick thing. Did you notice the common thread between these two shows? The answer is executive producer Alec Berg. He knows what he is doing for HBO. He also has held the same position on CURB YOUR ENTHUSIASM. He also holds writing credits for these same shows. So take note of how the current seasons of BARRY and SILICON VALLEY concludes knowing that Berg’s shows will pick up where they left off in 2019.