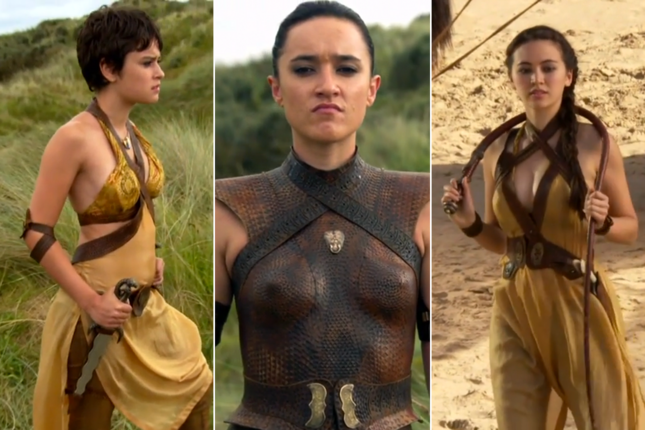 A recent special feature released yesterday on the blog Making Game of Thrones, has revealed more about upcoming Dornish characters and the weapons that make them so deadly. The video, which is two minutes in length, features a commentary Tommy Dunne, Game of Thrones’ “weapons master,” as he discusses several key weapons in the upcoming plot of Season Five. This behind the scenes look is an interesting introduction to the new characters we will meet, as well as a chance to admire the high level of skill that goes into building props for Game of Thrones.

While we have become accustomed to weapons such as long-swords, bows, and battle-axes, the Dornish weapons in the featurette are far more elegant, though no less deadly, than the weapons often used in Westeros. The first weapon to be featured is Areo Hotah’s long-axe. Embedded with many precious stones, and equipped with a fierce blade, the  device strikes an interesting contrast between the highly decorative and the extremely dangerous. The lavish decoration is appropriate, given Hotah’s position as the guard of Doran Martell, yet its functionality provides a sharp reminder of the duties that one must perform in such a line of service. Any doubt of the effectiveness of the weapon is swept aside as we see Hotah swing the long-axe into a deadly arc towards a man’s neck–the blade is sharp enough to inspire fear in even the bravest of warriors.

Speaking of brave fighters, we gain a close look at several as we see the weapons of the lethal Sandsnakes–bastard daughters to Oberyn Martell and infamous for their aptitude with their chosen armaments. First up is Obara’s spear, which is similar to Oberyn’s own weapon of choice in its make. Next featured is Nymeria’s whip–a gorgeous piece of weaponry with a snake winding about its handle. The video offers a quick shot of Nymeria expertly putting her weapon to use–show-casing its deadly elegance. Finally, we see Tyene’s double daggers, with beautifully curved blades that sink into viper shaped hilts.Each of the weapons are not only  highly detailed and beautifully crafted, but also carry the subtle themes of snakes which offer a tribute to the Sandsnake’s heritage.

This video offers an exciting look into some new characters and the weapons that define them. Which weapon was your favorite?

Game of Thrones season 5 premieres April 12th.  39 days and counting as of this writing.  Watch the latest trailer if you haven’t already.