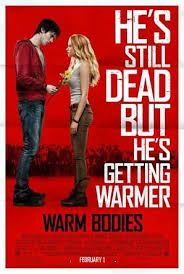 We’ve seen a few zombie movies grace the screen the past few years. A few were intended to scare the audience, while others made the audience howl with laughter. “Warm Bodies” is actually a romantic zombie apocalypse movie, believe it or not. Yes, the hero in our movie is a zombie and the heroine is a human. R is a zombie who likes to collect 70s and 80s memorabilia and hangs out in an abandoned airplane. He also “interacts” with another fellow zombie, M, who I gather is his best friend. Their communication is, at best, a few grunts and nods of the head. The airport lounge and waiting area are filled with zombies just walking around, day by day, living not much of a life. Then again, what kind of life do you live when you’re a zombie? That’s when the audience hears the monologue spoken by R. He has real thoughts and feelings and we get to experience them. So, while R is technically ‘dead,’ he still experiences thoughts and feelings about his day to day existence.

The movie is set in modern times, with humans fighting for their existence against zombies. Security is tight and small teams of humans go out on runs to retrieve medical supplies, equipment and such. This is where R and our lovely heroine, Julie, meet for the first time. Take into consideration that R is a zombie who eats human flesh, so you know their first encounter won’t be a pleasant one. R eats the brains of his human victims, because that’s where he can experience the victim’s memories. Unfortunately for Julie and her friends, not everyone makes it out of the abandoned building alive. To complicate matters further, the victim who’s brains R is eating just happened to be Julie’s boyfriend, Perry. The other zombies attempt to attack the others but strangely enough, R is drawn to Julie and ends up protecting her. Due to the fact that R ended up eating Perry’s brains, he experiences memories of Perry and Julie and thus, his attraction to Julie grows stronger. 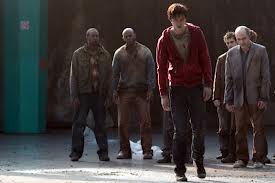 He leads her to his abandoned plane and keeps her there for a few days, ensuring her safety. He knows a few words here and there, so they are able to communicate, albeit it’s Julie who does most of the talking. While she is grateful that he saved her life, she wants to return back to the city and to safety. She has many unsuccessful attempts at trying to get back home and to add to her frustration, every time she makes an attempt to escape, she draws zombies towards her. Well, hello? You are human, after all. R has to save her every single time and during one escape attempt, confuses his friend M. M wonders why R saves her, because she is human and a potential meal for them. At this point, R feels that Julie has been put in danger enough times and that it is time to return her back home.

While en route back to Julie’s city, R reveals that he is the one that ended up killing Perry. Over the course of a few days, R begins to act a little more human, as do the other zombies who live in the airport. Something strange is happening to them. The fact that the zomb 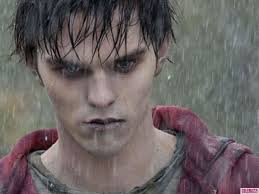 ies are starting to show signs of ‘life’ poses a great threat: there is another species of zombie called the Boneys. These zombies have no trace of human left in them and look quite skeletal. They roam around and if they detect the slightest shred of human ‘life’ in another zombie, they attack it. R and M end up leading a group of zombies to the city, behind the wall and inside of an abandoned football stadium. They need to contact Julie to let them know what is happening. One more thing to make this even more comical: Julie’s father just happens to be the man in charge of the city – Colonel Grigio. Might make things a bit difficult, eh?!

Once R manages to sneak inside and find Julie, her friend Nora meets him and is more or less shocked, yet fascinated at R. In fact, in order to make R blend in, they use a lot of make up on him, which is perfect. R can now speak a bit better and move along the inside of the city with Julie and Nora, in order to warn Colonel Grigio about what is transpiring and if there is something that can be done. What started off a good idea ends up as a futile attempt. Colonel Grigio gets angry and would rather kill R and the rest of the zombies, then believe that they are starting to come back to a human like existence. He prefers safety and caution over whims and wishes. Nora outsmarts him and pulls a gun on the Colonel, in order that Julie and R can make a clean getaway. 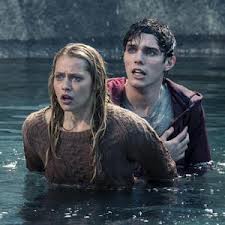 er have their hands full, inside the football stadium. Hordes of Boneys have come to fight against them. Things begin to look grim, as the zombies who want help can only move and do so much, while the Boneys are swift and strong. R and Julie run in an attempt to escape the Boney horde, but in the end, they find themselves literally backed into a corner, with only a small door as their means of escape. The door leads to nowhere, except what looks to be a very long way down and at the bottom of that fall is a fountain and pool. R tells Julie to jump with him and he ends up shielding her with his body, softening the impact once they land in the water. But then, something strange and wonderful starts to happen….R hits his head (which is not the wonderful thing) and is knocked unconscious. Julie and R rise out of the water and they look at each other, finally giving in to their feelings. They kiss passionately, at which point R is shot in the shoulder by Colonel Grigio. Seconds after Julie and R stopped kissing and a moment before he gets shot, you see that he goes from being a zombie to being completely revived as a human being. His blood runs into the water and it’s a bright red colour. The same kind of blood that humans have. Julie, her father and the other soldiers see this as proof that for some strange reason, R has come back fully as a human and cease fighting.

The rest of the Boneys are wiped out and we see the other zombies begin to change back to their human form. A lot of them assimilate into the population again, trying to have as normal of an existence as possible. Julie and R sit on a fence, watching the sun and look at the landscape, watching as the wall begins to crumble. The wall tumbling down means that the zombie apocalypse has now come to an end, and for Julie and R, they can actually have a ‘happily ever after.’ 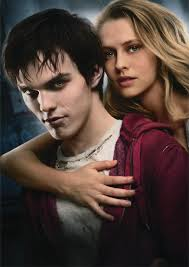 I actually liked this movie and thought it was an interesting twist on the whole zombie apocalypse genre. I think many people enjoyed the movie because you start looking at it from the zombie’s perspective. After all, before they were zombies, they were humans and could think, feel and love. They had jobs, friends and homes. They lived, they loved and then there was this zombie infestation. It gives you hope that maybe, just maybe, there could be a positive outcome and that the zombies aren’t so bad, after all! Loved John Malkovich’s turn as the Colonel. Nicholas Hoult is pretty expressive and you almost feel his anguish, especially with his eyes. I liked Teresa Palmer’s turn as Julie, a smart, pretty and optimistic young woman in an oppressed and paranoid world. Kind of gives you hope that true love does reign supreme, after all. I recommend watching this one! 