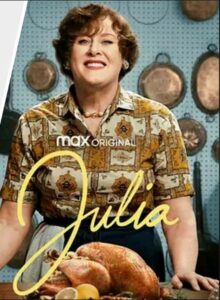 If you ever enjoyed watching the 2009 movie “Julie and Julia” starring Amy Adams, Meryl Streep and Stanley Tucci then I have a special treat for you. HBO Max came out with a new series called “Julia”. It stars Sarah Lancashire as Julia Child, David Hype Pierce as Paul Child, Bebe Neuwirth as Avis DeVoto, Fran Kranz as Russ Morash, Brittany Bradford as Alice Naman and Fiona Glascott as Judith Jones. The first episode came out on March 31st, 2022, and so far, there have been eight episodes. I will be reviewing two episodes at a time and so far, the first two have made me cry, smile, laugh but most of all be really hungry.

Unlike the movie where we saw Julie, Amy Adams’ character, recreated all of Julia’s recipes from the book “Mastering the Art of French Cooking”, the TV show follows Julia Child and her husband as they reside in Boston. The TV series focuses more on how Julia Child got her start with her very own cooking show and her relationship with Paul.

We meet our stars at a dinner party in Norway. Julia is cooking a feast for her husband and their guests when Paul gets a phone call from the embassy. Instead of being sent back to France the Childs’ are sent back to the US. A year passes as Paul has been forced to retire and enjoys leisure time painting and Julia works on her second cookbook with Simca. 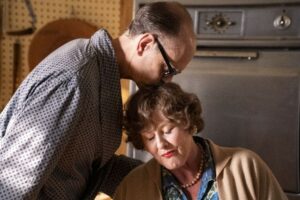 As the days go by Julia gets invited to a local TV studio to introduce her first book “Mastering the Art of French Cooking” to a more “broader” audience on the show “I’ve Been Reading”.

Instead of simply introducing the book as anyone else would Julia ends up doing her own thing by making an omelet for the host of the TV show. This scene is quite funny as Julia is rather a statuesque woman and is a little awkward on stage. She ends up creating an omelet using the cookware she brought from home and a hot plate. The host is a tad confused as to what is happening and the producers are not very amused with her antics. 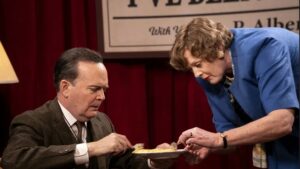 After appearing on the TV show and finding out that people actually watched the episode, Julia decides to write a letter to one of the producers at the station proposing a cooking show. She meets with Alice who unfortunately has bad news for Julia as the other producers are not impressed with the idea. Julia, being Julia does not take no for an answer and she manages to persuade or rather bribe them with chocolate cake. In the end, the producers agree to give Julia a chance at a trial episode but only if Julia pays for the entire thing.

With Julia’s excitement, she shares the news with Paul who unfortunately isn’t very supportive of the idea. Paul doesn’t believe Julia should waste her time on a fad like TV and instead she should focus on writing a second cooking book with Simca. To help Paul change his mind she brings out the big guns. And who you might ask would that be? Well, let’s just say it’s someone who has published Julia’s cookbook, Judith Jones.

During dinner, Judith and Julia use reverse phycology on Paul to persuade him that Julia appearing on the trial episode of the show would be good exposure for her book. The clever pair manages to convince Paul that this whole thing was his idea, and, in the end, Paul agrees and is convinced that Julia should most definitely film, at least for now, the trial episode.

We start off episode two with Julia and Paul contemplating what dish Julia should make for her pilot episode of the TV show. They come to the conclusion that Julia should make “Coq Au Vin” which is a French stew of chicken braised in red wine with mushrooms and crisp pancetta. This dish takes about 4 hours to make and cook so how does Julia make that dish in only 28 minutes? To conquer that problem she assembles her team, Paul, Avis, Alice and Judith. For hours they work on making the dish in as short of a time as possible, coming up with ideas on how to make everything more proficient. 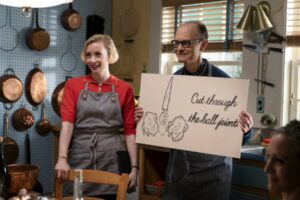 The following day the entire crew packs into Paul’s car, including all the necessary cookware needed to film the pilot episode. As they reach the studio Julia becomes terrified as nothing is placed where it is supposed to be. She starts stressing out over every little thing. As the cameras turn on and start recording, Julia’s anxiety becomes quite high and very noticeable, she starts sweating profusely however with her team by her side, literally, Julia manages to relax and starts cooking Coq Au Vin, she even manages to crack few jokes. 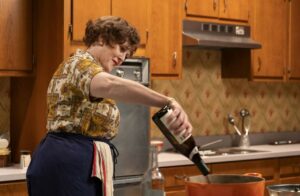 As the filming of the episode goes on Julia runs into a few minor difficulties here and there. She cracks a few jokes and has some issues with the cookware as well as the dish itself however in the end she manages to cook Coq Au Vin to perfection in a very short time. By the end of the filming Julia isn’t so sure that her performance convinced Mr. Morash to give her own show. Disappointed the Childs’ head home.

Despite Mr. Morash’s objections, the network executives decide that the pilot episode of Julia’s show will end up airing on TV. Everyone except Mr. Morash and Julia is excited to see the outcome of the filming. Julia feels embarrassed about how the filming went and is not willing to watch the airing. However, Paul manages to convince her to come and watch. Everyone gets ready to watch the pilot episode; Julia and Paul sit on their sofa about to turn the TV on when . . . .

….I don’t think I will spoil the ending of this episode for you. Find JULIA exclusively on HBO Max and stayed tuned for my review of the next two episodes coming up really soon.