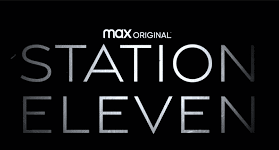 On Thursday, December 16 the first three episodes of the HBO Max Exclusive drama STATION ELEVEN were uploaded. This post is a look at the first installment of the limited series which is based on the international bestseller of the same name by Emily St. John Mandel. The 10-episode is a post-apocalyptic saga spanning multiple timelines and tells the stories of survivors of devastating flu as they attempt to rebuild and reimagine the world anew while holding on to the best of what’s been lost.

First, as a precursor to this site’s review of this limited series, here is an excellent video clip that gets us into the mindset of the tale before us. Listen for some great points that tell us what this show is about. It talks of the stripping away of all the trappings of this world and, as a result, having only the essence of humanity left. It also asks us to consider that what is left after a post-apocalyptic event is not bleak and tragic, as is the case with most stories of this ilk, but just different yet thriving.

Now, to Episode 1 – “Wheel of Fire.” This story opens on the eve of a deadly flu pandemic that wreaks havoc over the world. Note that Mandel’s work was published in 2014 so this story wasn’t intentionally set to be so relevant. As for the timing of this cinematic adaptation, it must have wanted to cash in on the feelings of the times to perhaps make a story more relatable to viewers. 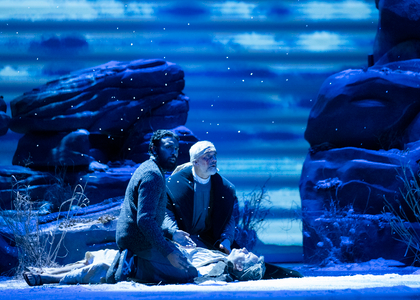 So, here we are; we first find ourselves a bit in the future at an overrun, pig-infested theater space, then to that same space years earlier. We find ourselves in Chicago sitting on a production of King Lear. We are here to set up some main characters in the story. An actor, Arthur Leander (Gael García Bernal) collapses and dies onstage. Making his way to the stage to lend aid is Jeevan Chaudhary (Himesh Patel), an underemployed writer. The curtain falls as a bit of chaos ensues. In the aftermath Jeevan notices Kirsten Raymonde (Matilda Lawler), an 8-year-old actress left forgotten. After moments of trust are established, he offers to see that she gets home several subway stops down the line. He does so, well, because that is just the sort of guy Jeevan is. He wants to be helpful, purposeful and good.

Along the way, he is on the phone with family and discovers that a deadly pandemic is blooming all over the world and for this unlikely duo, a now larger chaos looms than the one they left at the theater. Jeevan keeps the reality from his young ward only to discover that he cannot leave her alone locked out of her empty home, thus becoming a more permanent ward in his care. We get only a glimpse of the viral threat that ravages. Perhaps more about that zero hour will be revealed as the story unfolds but we are already of the understanding the “how” of the deadly event is not what is important here. Jeevan has a plan to hold up on the 42nd floor of an apartment complex with his brother Frank (Nabhaan Riswan).

Here is a good place as any to talk tone and pacing. Humor punctuates this drama quite slyly. For example, there is a whole scene of Jeevan and Kirsten in a 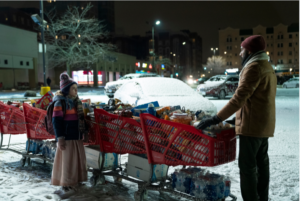 supermarket stocking up on groceries as they prepare for lockdown. They end up racking up a tab of several thousand dollars and a long train of shopping carts they need to maneuver down the street. Most other slips of humor come via precisely placed one-liners, all wittingly executed. But when the drama hits it leaves a mark. As for the pacing it does move along for the most part but there are a few stagnant shots to give your emotions a moment to settle in. Another element, that will likely happen throughout the series, is the jumping of time. You know, the flashbacks and flash-forwards that have been happening on TV since ABC’s Lost? It is no longer a novel device but is employed here because clearly the whole story cannot be told otherwise.

One such flashback sets up another character – Miranda (Danielle Deadwyler), a logistics expert who makes time ahead of an overseas trip to visit her former husband, Arthur. Yes, the same Arthur who dies onstage. She gives him a gift of a graphic novel entitled “Station Eleven” that she has written. Little does she know that this is the last time she will see him alive. Of course, this also serves as an example that all of these story threads tie together to tell the story of a new humanity arising from tragedy.

For a flash-forward, we can cite the scene when Jeevan & Kristen emerge from Frank’s apartment 80 days later to move onward into a new world. What lies ahead for them? We only get one peek at that at the end of the first episode. It is of an older Kristen (Mackenzie Davis) as she finds a quiet place in the dune grass to read the dog-eared copy of “Station Eleven” that was once Arthur’s. A call to rehearse interrupts her reading. So, we know that at least Kirsten, seen in her 20’s, survives and that there is some sense of hope for humanity. That shouldn’t be a surprise knowing the premise of the show but also because executive producer Patrick Somerville wrote for the HBO series THE LEFTOVERS previously. That series, of course, rang with hope. It also is this writer’s favorite HBO series so I’ll be looking to see if STATION ELEVEN in the weeks ahead can match it.

Civilization may not have a chance after an apocalypse but humanity does.