Since we bothered to tell you of the 77th Golden Globes nominations that HBO garnered we figured we’d better play it through and tell just what awards from the Hollywood Foreign Press it was homered with.  HBO topped the honors as the network with the most wins which was only totaled four but it is wins happily yearned Those winning Globes went to – 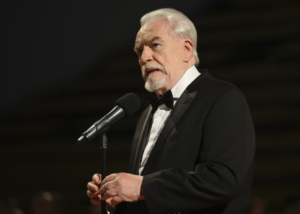 And Best Performance by an Actor in a Supporting Role in a Series, Limited Series or Motion Picture Made for Television –  Stellan Skarsgård for CHERNOBYL

SUCCESSION gets some big recognition there for taking the best drama on TV away from HBO’s BIG LITTLE LIES, Apple+’s The Morning Show, Netflix’s The Crown and AMC/BBC America’s Killing Eve. Brian Cox (pictured, right) managed to win his category against Kit Harrington of HBO’s GAME OF THRONES, Billie Porter of FX’s Pose, Rami Malek of USA’s Mr. Robot and Tobias Menzies for Netflix’’s The Crown.

CHERNOBYL was indeed a standout as well. It took the top honor in its category from Netflix’s Unbelievable, Hulu’s Catch 22, Showtime’s The Loudest Voice and FX’s Fosse/Verdon. Stellen Skarsgård (pictured, left)walked away with his trophy after besting Henry Winkler from HBO’s BARRY, Kieran Culkin from HBO’s SUCCESSION, Andrew Scott for BBC/Amazon’s Fleabag and Alan Arkin from Netflix’s The Kominsky Method.

“I was happy, I thought they were all deserved,” HBO President of Programming Casey Bloys said of the network’s four wins. “I thought Meryl should’ve won, I called that a head-scratcher, but you always root for your team. We managed to do so well, and we didn’t have Game Of Thrones,” Bloys said. “We are excited what that shows for our future.”

Whew, see why we don’t keep an eye on these award things? What a great win for HBO fave SUCCESSION and the gripping CHERNOBYL!