Right off the start, I have got to say that HBO International content never disappoints. If you are not going to either of the two streaming sites and including the content from other lands in your viewing then you are missing out. I’ve seen a half dozen shows now from other regions but this is the first time I’ve taken on reviewing one of them. Normally, HBO slips the International content onto the sites with minor announcements however, due to the dearth of programming ahead because of the pandemic, HBO has also put 30 COINS on the HBO channel as well. It airs Monday nights beginning at 9:00pm ET. Here is my look at Episode #1. 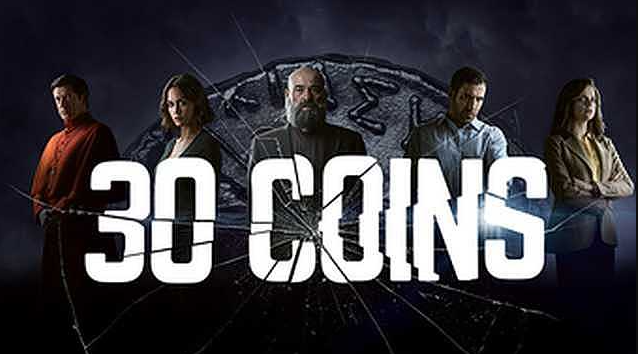 Episode 1: “Cobwebs”
Debut date: MONDAY, JANUARY 4 (9:00-10:20 p.m. ET/PT)
The quiet town of Pedraza is shaken by the birth of a mysterious child. Local vet Elena (Megan Montaner) and Mayor Paco (Miguel Ángel Silvestre) investigate the incident and begin to uncover the troubling past of their newly appointed priest, Father Vergara (Eduard Fernández) – and the significance of a curious coin he has in his possession.

You see, it is all about the coin. You might be able to deduce the significance of it and what ramifications it might hold in the world if you understood what type of coin a Spanish padre would cherish and your biblical stories. In case, you haven’t seen the trailer and don’t get the connection, the opening scene makes it clear – the coin Father Vergara holds is just one of thirty – one of the coins paid Judas Iscariot for betraying Jesus Christ. Holding one of those coins would be special and sought after and, as it turns out, an ominous talisman for otherworldly terror. Evil forces are out to collect all 30 coins so, Vergara and his town are in danger. The trailer alludes to all that quite nicely.

I’m going to say this one time – you have to read the subtitles – get over it.

In the episode breakdown above it states that our female lead in the series is a ‘vet;’ not a veteran of military service, but a veterinarian. She is thrown into the story because a cow from a local farm is ready to give birth. It gives birth to a human baby! At first, all think it a supernatural sign, later, however, level heads think it a prank. But no, it is really a supernatural sign, a demon is born into our world and the farmer’s wife takes it in to raise it as her own. The lady, Carmen, is soon possessed herself to nurture the demon as it manifests into a great beast of horror (glimpsed in the trailer). That which speaks through Carmen is after the silver coin that it knows is in the city of Pedraza and will stop at nothing to get it.

Elena and Paco assist Father Vergara in beating back the beast and saving Carmen’s soul but this fight between good & evil has just begun. Exactly who or what is seeking out the 30 coins? The Catholic Church might stop at nothing to obtain the relics, but something more sinister, that which can summon demons and other paranormal frights, is on the hunt. Satan is never called by name, but who else could it be? Does Father Vergara have the fortitude and devoutness to take it on? What other horrors will come his way?

We will see in the episodes ahead. If episode #1 is any example of the wicked, twisty journey we are about to embark on then prepare to be gripped and battered about in this mad, wild ride. There is humor dispersed throughout only to be slapped away by anger and shock as the character’s adrenaline and the viewer’s pulses rampant. Special effects are subtle and effective, the pace non-stop for over an hour and you can almost smell the musty ancient Pedraza itself as you poke through the rubble, the cobwebs and the old reliquary items.

The evil that was within Carmen is going to be hard to beat. The power of the 30 coins is yet to be revealed. I glanced over some of the details on purpose to draw you in. I suggest you take up 30 COINS and take it to its conclusion. It will grip you!