Viewers got all caught up in the spooky happenings of LOVECRAFT COUNTRY when it ran for ten episodes from August into October of 2020 under the helm of showrunner Misha Green. Then something equally as spooky happened – the show stopped with no announcement of a second season. Fans of the show, adapted from the novel by Matt Ruff, are still awaiting news of its return. Casey Bloys, Content Officer, knows this and thus offered the following statement:

“Misha is working with a small team of writers and they’re coming up with a take. She had a book to go on in the first season, she and the writers wanted to go off and take some time to go out and figure out without a book with these characters, what’s the journey we want to go on. We all want to be sure she’s got a story to tell. That’s where she is right now, working on those ideas. I’m very hopeful, as is Mischa, so we’re giving them the time to work.”

Okay, that wasn’t the best-constructed statement out there, but we get it. Season One of LOVECRAFT COUNTRY was all spelled out because Ruff’s source material was the bible to shape the series. Anything going forward needs to be written from scratch and that takes forethought and time. This echoes comments from Green made previously –

“I envision a second season that carries on the spirit of Matt Ruff’s novel by continuing to reclaim the genre storytelling space that people of color have typically been left out of.”

The tone & social comment of that series was so well-received the first time around and that formula needs and should be captured again going forward. It will take time to shape what will happen next to Letitia (Jurnee Smollett), Hippolyta (Aunjanue Ellis) and the rest of the 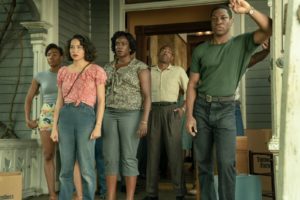 family. And what of Atticus (Jonathan Majors), will he return for the story? What other Lovecraftian horrors can be created to fit the story? We will have to be patient before we will get those answers. Hopefully, Misha Green and her team of wordsmiths can craft a believable and memorable second season of LOVECRAFT COUNTRY, but we’ve got to wait. We will keep you informed.
(Source: Deadline)