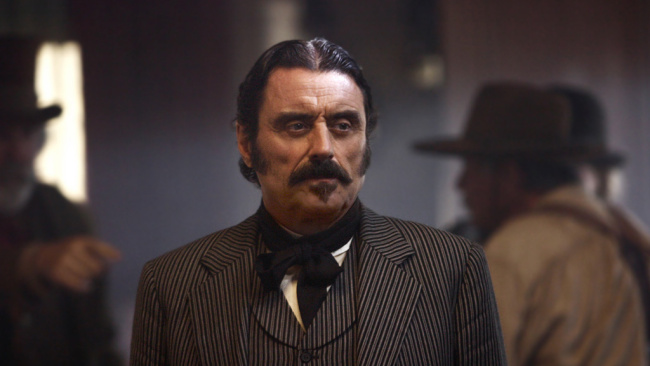 DEADWOOD aired on HBO from 2004 to 2006. That is over ten years ago and we have been waiting for a return to the South Dakota frontier ever since. Just look at what we have been saying for a while now:

–From Aug of ’15 is Are You Still Hoping For A DEADWOOD Movie?

Now we add big news to that list with more comment from Ian McShane who, of course, played Al Swearengen. While chatting with the Press about his stint in American Gods for Starz and unfortunately passed over by HBO, he let some quotes drop about DEADWOOD.

From TVLine we get these words –

Series creator David Milch’s “two-hour movie script has been delivered to HBO,” Ian McShane reveals to TVLine exclusively, before adding with a laugh, “If they don’t deliver [a finished product], blame them.” he’s spoken to Milch “about some of” the script. “I’ll be seeing him for lunch [soon],” he continues. “We’d all love to do it… It would be nice to see all of the old gang again.” 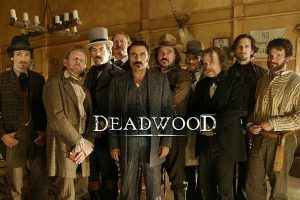 Yeah, we’d love to see that gang again, too. We’ve been waiting so long. So if we can speculate a bit, Milch walks into HBO’s office with a movie script under his arm and drops it in front of Casey Bloys. Does it pick up where the series left off? If you recall there were big elections in town with candidates up for Mayor and Sherriff and a strong power play by Gerald McRaney’s George Hearst. Or will the work pick up the story a decade later? Deadwood didn’t become incorporated until 1876 so the Deadwood we see in the new venture could be quite different from the one we left.  HBO now has a decision to make. Is this a solid story they can get behind? We can only hope as we still wait. How many more wishful posts will we make before DEADWOOD: THE MOVIE happens?