Well it happened one more time.  HBOGo went down last night around 6PM PST / 9PM EST.  You can probably guess why.  Game of Thrones is by far HBO’s most popular program and is often referred to as its “flagship” series.  There has been more hype than ever behind season 4 and all of it came to a head online when the premiere went live on HBOGo.  The official Twitter account was all over it:

Looks like there’s trouble in the realm. Apologies for the inconvenience. We’ll be providing updates, so please stay tuned. #GameofThrones

Users on Twitter took their rage public, lamenting the service for its unreliability:

Hey, come on HBO Go, one of my roommate’s parents [grandparents?] are paying good money for this.

Many of you may be feeling a sense of deja vu because a similar incident happened recently during that True Detective finale.  Many assumed that HBO would have beefed up their servers by this time to avoid another incident but even if they have it’s clear it wasn’t quite enough.

To be fair this was probably one of the biggest nights (if not THE biggest night ever) for HBO Go.  With a climax season of Game of Thrones premiering, Veep and also the premiere of a new series Silicon Valley if HBO Go was ever going to falter it was going to happen that night.  In fact this site too, HBOWatch went down for some around that same period under the world’s crushing demand for information on Game of Thrones and other HBO series.

Can’t we all just blame this guy?: 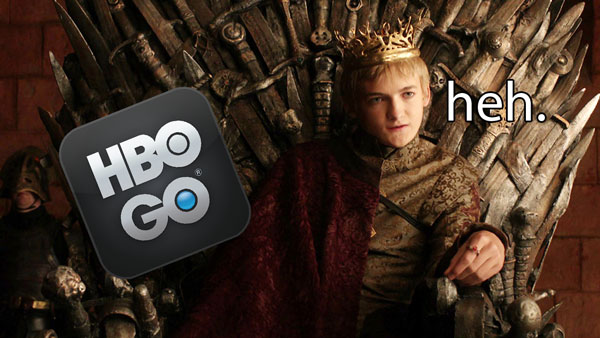 Or maybe it was Frank Underwood’s doing.  The cheeky social media team over at Netflix posted this that night:

Welcome back, @GameofThrones. May the best House win. #FU pic.twitter.com/khW0Hg3MXK

We don’t foresee any nights as big as this one in the next year or so.  Perhaps True Detective season 2 or the Boardwalk Empire / True Blood finales will be good tests but they will most likely pale in comparison to April 6th, 2014.  Let’s hope that gives the HBO engineering team some time to put together a real plan for upgrading the system so that it’s able to handle the demand.  For those without a subscription there are other ways to watch online but you may not be satisfied with most of them.

All of the shows are available On Demand, as always and if you DVR the series (which you always should just in case) you’ll have it there.  In fact Silicon Valley episode 1 is on YouTube for free right now.  Watch on!