He just came off the award-winning The Americans on FX and now he is in the courtroom. Matthew Rhys has snagged the role of Perry Mason for a limited series 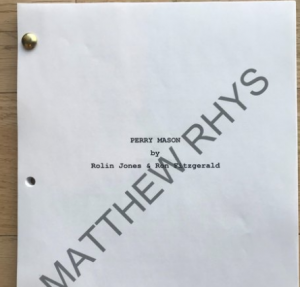 coming to HBO. We reported that the project was a go back in August of 2016. At that point, it was the next project for Nic Pizzolatto as a vehicle for Robert Downey Jr. In September of 2017, we learned that Pizzolatto was out as the writer and moving on with the third season of TRUE DETECTIVE. The Downey project took on new writers and the project was taking shape. Then in August of 2018, we learned that Robert Downey was out as the onscreen talent, but that his production company was going forward.

And now Matthew Rhys, who appeared in one GIRLS episode in 2017, has taken the Erle Stanley Gardner role on. Of course, the role was made iconic by Raymond Burr. The work is a passion project for Downey and now the project is just one step closer with the lead role locked in. Robert Downey announced the news in a 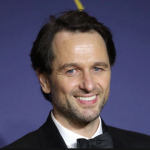 tweet. Once again, here is HBO’s official description – “1932, Los Angeles. While the rest of the country recovers from the Great Depression, this city is booming! Oil! Olympic Games! Talking Pictures! Evangelical Fervor! And a child kidnapping gone very, very wrong! Based on characters created by Erle Stanley Gardner, this limited series follows the origins of American Fiction’s most legendary criminal defense lawyer, Perry Mason. When the case of the decade breaks down his door, Mason’s relentless pursuit of the truth reveals a fractured city and just maybe, a pathway to redemption for himself.” 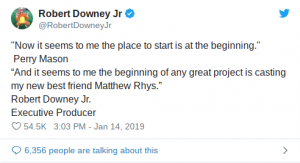 Written and executive produced by Rolin Jones and Ron Fitzgerald, who also will showrun, the reimagined PERRY MASON just needs to get a director on board for the limited series to get before the cameras. We will keep you posted on the progress of PERRY MASON.