The Leisure Class is a film inextricably linked to its production, being the final project of Matt Damon and Ben Affleck’s newly revived series, Project Greenlight. When you look at a painting or listen to a song, you don’t normally see or hear the struggle that went on between conflicting artists vying to bring their vision to life. However, here that’s specifically the case as an entire television show was produced around the making of this film.

From the start, Project Greenlight winner Jason Mann presented himself as someone with a vision he wanted to bring to life. It was his cinematic eye that shined through in Delicacy, the short film he entered in the competition, but what Matt Damon and Ben Affleck couldn’t predict was that besides his eye, he had an obstinate mouth. Throughout the show Mann had been presented as stubborn and naive about the realities of moviemaking, constantly doing the one thing someone in such a collaborative business should never do; he failed to make compromises. The behind-the-scenes look at his film The Leisure Class, which premiered on November 2nd  after the show’s finale, presented the struggle of not just making a film, but the struggle of working with people who follow their vision to the detriment of everything else. 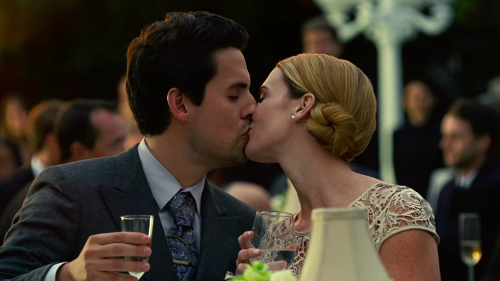 For that, I wish, I really wish, that the end result was something to be propped up as a 1st place trophy in the I TOLD YOU SO contest. The fact that he received everything he asked for meant he had an even bigger responsibility to deliver a finished product that shined as the best  example of what happens when you let an artist be an artist. But what’s come out of the auteur mind here is something spoiled by too much freedom. Which is why some of the best works, not just in film but through all mediums, have been the result of constraints and compromises. There weren’t enough cooks in the kitchen, and the ones there just kept adding salt because that’s the flavor they like most, unaware that the soup they were making turned into a brine.

Charles and Fiona are on the eve of their wedding, hosting a rehearsal dinner in the yard of her parent’s estate. Charles, it seems, is about to marry into wealth and power like he never had before. However, he has a secret that could bring the whole thing down around his ears; he’s a con man named William, living the lie he built around himself in a legitimate attempt to marry Fiona out of love (with everything he wanted previous as a fun little add-on). With the arrival of his devil-may-care brother Leonard, that secret is at risk of being exposed, turning family on family and forever changing the relationships of those involved.

The biggest problem here, as you may have gleamed from that summary is that there is very little conflict throughout this movie. For an hour and twenty minutes, instead of watching a man caught in a dozen lies trying to weave his way through them to maintain his persona we are privy to the briefly engaging and eventually ear-grinding bickering of a rich family doing rich family things. There’s no greater sense of drama to this situation, no stakes that place any of these characters in real trouble. The film is mired by the inexperience of the writer/director, as evidenced by the numerous “student film” mistakes he makes.

The characters are stiffer than girders, only ever presenting themselves on the factory settings and rarely deviating. Charles (or William) never gets beyond stammering excuses for everything until he’s finally honest, Fiona is the prude until she’s driven to go wild, and Leonard is wild and crazy until it’s time to be heartfelt and sincere. Instead of actors becoming people, they become archetypes. It’s a testament to the strength of the acting that the film can momentarily be engaging to watch. The improvisation between Ed Weeks and Tom Bell as brothers William and Leonard is more miss than hit, but it’s the most natural sounding dialogue in the film. Bruce Davison practically wills the movie along by himself as the Senator and aristocratic Patriarch until by the end of the night even he gets bogged down by the melodrama. 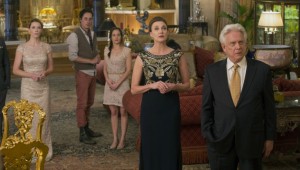 It almost seems counter-intuitive to say then that Jason Mann is a good director, but I do see the promise in what he could have to offer down the line. Wanting to shoot on traditional film stock may have felt artistically pure, but for a movie premiering on tv instead of in theaters, it’s barely a noticeable difference from digital. Though Mann wanted the estate to be its own character, there’s nothing presented that suggests this place even has personality. And that makes the search for a location, as it was presented in the show, a complete waste of time. That said, he didn’t shy away from trying to get what he felt was necessary to bring his movie to life. For all the jokes that fizzle out like wet firecrackers there’s still that momentary pop where you think, “maybe there’s something there.” You can tell from the onset that he cared a lot about the way he brought this film together, why it meant so much to get it done exactly the way he wanted. When trying to glue together a shattered vase, the design might become clearer but the cracks only give way to the empty space inside. As it stands, The Leisure Class could be a great student film. Up against the back catalog of movies that have been produced by HBO prior, Mann still has a lot of catching up to do.

I hate jumping onto this dogpile of calling out the film because this was an effort of someone to pour their heart onto the silver screen. Love Jason Mann or hate him, if you watched Project Greenlight you saw he gave it his damndest to bring his vision to life in the way he thought it could be best portrayed. Sure he was uncompromising and difficult for some of the people to work with but every time he held to his convictions and won, it felt like a victory for artists everywhere who feel downtrodden underneath the “corporate blanding machine.” I give him a lot of respect for that. I just wish his film was something greater than the story of its production.

Watch the Trailer for The Leisure Class Below!