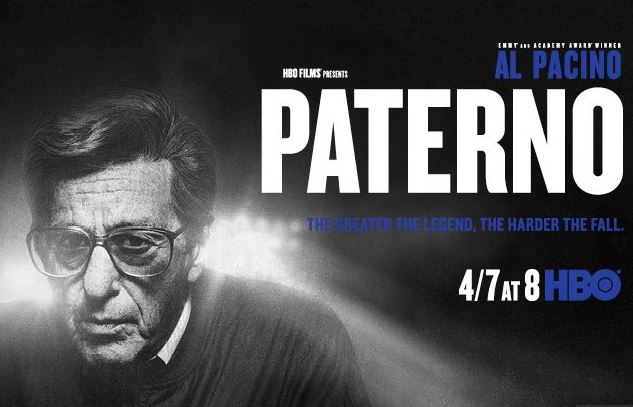 This HBO Films presentation hits close to home for this writer. Penn State is the University of pride in my neck of the woods and Joe Paterno was a legend indeed. We lived the whole scandal nightly on the local news and protests and discussions were commonplace. He is affectionately called JoePa around here still. WE ARE PENN STATE! Having gotten that factoid out of the way you can suspect that my pride would influence my take on HBO Films: PATERNO.

My biggest takeaway from the movie was how quickly we are reminded that Hollywood skews the story and plays with the truths to get the story it wants to tell. Never, ever take a movie based on true events as the gospel truth of what happened. They are entertainment pieces, not historical accounts. Those who learn their history via Hollywood are not getting accuracy. That becomes most evident when a film is based on an incident that hits close to home as this one does for me.

As much as I revered JoePa I’m not sure why he is the focus of this movie except that Al Pacino wanted to get behind another prosthetic nose and get lost in another tragic character. He has proved he can pull it off with Roy Cohn, Jack Kevorkian, Phil Spector and now Joe Paterno for an HBO event, but his character and his story is just a part of the larger picture here. This film shows the tumult JoePa was under and the fall he took in the aftermath of the Jerry Sandusky scandal. The real criminal of the piece, Sandusky, was just seen and never heard in the piece. The crimes were alluded to and never somehow tastefully played out. The lives and stress of any victim or periphery characters was not a focus. As much as I liked seeing JoePa depicted on screen by Pacino the larger story was secondary. I think that is because JoePa was the one on the pedestal; the one revered by all as the greatest college coach ever and the one person who fell the hardest from glory.

The movie’s setting is two weeks in November 2011, during which the late Penn State coach won his record-setting 409th career game, was fired in his 46th season and was diagnosed with lung cancer. He showed loyalty and generosity throughout his career and life and this scandal rocked him to the core. Pacino played him simply and without too much dialog. The 105-minute piece leaves things open-ended. Some scenes, that don’t feature JoePa, don’t even get played out to their conclusion and, of course, there is dramatic license employed. Those moments are the crucial ones we hoped to see but knew there was no way we really could. They were the personal moments that JoePa had, whether they were the moments in the MRI machine that start the movie or the alone time in his bedroom. We just don’t know. 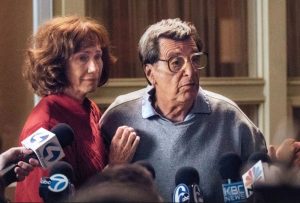 This Made-For-TV movie starts with a confused Joe Paterno in the hospital with terminal lung cancer. While in the MRI he reflects back on his football career and his family and the turbulent times that rocked his program and Penn State University during the Sandusky scandal. Jim Johnson as Jerry Sandusky and Darren Goldstein as Mike McQueary appear ever so briefly. Athletic Director Timothy Curley and President Graham Spanier also had some screen time as they also skirted around the scandal and all lost their jobs as a result. They were played by Steve Coulter and Tom Kemp respectively. The supporting players in the movie played the supporting players in JoePa’s life – his family. Kathy Bates was wife Sue and Greg Grunberg, Larry Mitchell and Annie Parisse played children Scott, Jay & Mary Kay. (There are two other Paterno children). Also a large part of this story is that of Riley Keough‘s role as Sara Ganim, the reporter who broke the story in the news. Some of the best scenes in the film is when the family is sitting around the home reasoning with their father, trying to get him to read the official documents and trying to protect him from reporters as the scandal heated up. As the family did not give support or input to the production what exactly transpired in the Paterno home is unclear, though some reporting of what happened had been made public as time went on including, for example, Sue Paterno becoming physically ill after reading the indictments. The main issue though in PATERNO was what was going on in JoePa’s mind.

Was he only focused on football and uncaring of the scandal? Or, was he totally uncomfortable and unwilling to face the truths that conflicted with his set of ethics and morals? The verdict at the end of this movie is not clear cut either way. The answers are lost for all time. The others complicit in the scandal also get some screen time as does the rest of the Paterno family. Many went down for allowing the assaults to escalate but no one went down harder than JoePa and PATERNO makes that clear.

In the end, the story is not all fact, the story is not complete. But the story that was told by director Barry Levinson was a strong one. Depending on where the viewer sits on the issue, or perhaps, how close they live to Happy Valley influences the way the film and the main character are seen. Maybe, that is the effectiveness of the piece showing through. Levinson doesn’t make a blatant assertion about Paterno’s stance in the matter and totally leaves it in the minds of the viewer to make the call.

I’m sure you know my stance. JoePa was a scapegoat! WE ARE PENN STATE!

Now, if someone outside of Happy Valley wishes to weigh in I welcome it below. HBO Films Paterno is now playing across the channels and on HBONow/Go and On Demand.