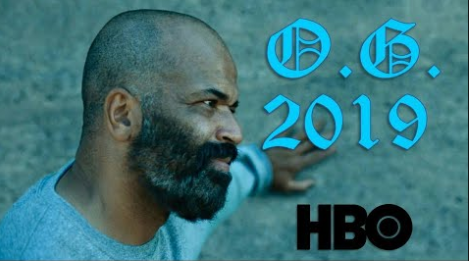 HBO Films: O.G. follows Louis (Jeffrey Wright), once the head of a prominent prison gang, in the final weeks of his 24-year sentence. His impending release is upended when he takes a new arrival Beecher (Theothus Carter), who is being courted by gang leadership, under his wing. Coming to grips with the indelibility of his crime and the challenge of reentering society, Louis finds his freedom hanging in the balance as he struggles to save Beecher. That, in a nutshell, is the basic plot of prison drama created by first-time fiction director Madeleine Sackler. Her forte has been non-fiction titles including ones that have appeared on HBO (DANGEROUS ACTS STARRING THE UNSTABLE ELEMENTS OF BELARUS). 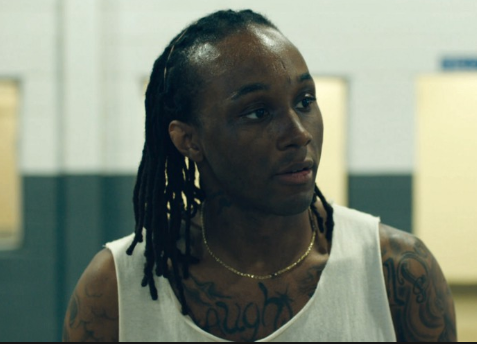 young Carter himself is an inmate. The chance to have safe & actual filming time at the facility was truly a lucky strike for the film but the movie shouldn’t ride on that acclaim to draw viewers. There is no question that the access made for a realistic film, pulling no jabs that this is what prison life is like – time in your cell, time outside, time to work (for example, the auto body shop where Louis works), time for meals, time for strip searches, time for lights out. However, it can be a bit distracting for some perhaps to get caught up in guessing who is an imported actor and who is not. Other professional actors joining Wright are William Fichtner as prison officer Danvers, Boyd Holbrook as parole officer Pinkins as well as Mare Winningham as Janice, David Patrick Kelly as Larry, Yul Vazquez as Baxter, Bahni Turpin as Ludlow and Ryan Cutrona as Piner. They hold the story together and the rest create atmosphere. Theothus Carter (pictured), for a non-actor, plays his role of Beecher fairly well considering.

But come on, actual filming in a prison is not what makes this. In fact, as prison movies go it isn’t all that interesting. It is not violent, raw & gritty like HBO’s OZ series; it seems almost like a well-oiled collective society complete with recreation, work and small amenities. Yeah, there are a few tussles in the yard or in the lunch line but nothing powerful. A simple reason for that is that it is really a character study of Wright’s character of Louis and it is wonderful seeing him in that starring role.

Of course, I am not going to reveal what happens to Louis, the O. G. or original gangsta’ of the piece. I actually pondered his plotline going a few different ways. He is weeks away from serving his sentence in full when prison politics ramps up. He tries to keep his nose clean and let it all play out as it will until he helps Carter who is in the thick of it all. I thought that either the crises would resolve and Louis does get to walk out a free man or that he gets shanked and dies just days before his release or that he actually decides he can’t handle it out in the world and makes some huge move to up his sentence in the eleventh hour. Only one of these scenarios plays out, but which one?