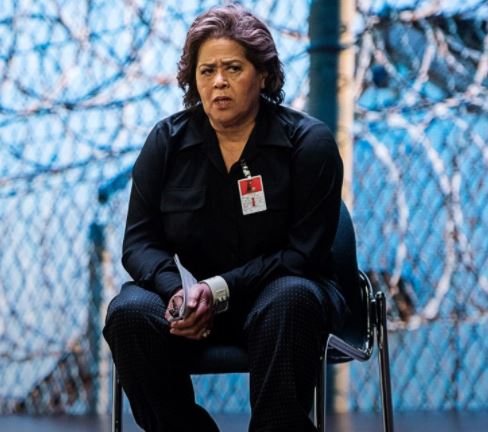 A full production of Anna Deavere Smith’s NOTES FROM THE FIELD opened in late 2016 at the American Repertory Theater in Cambridge, Mass., and immediately transferred to off-Broadway, opening at Second Stage Theater in New York. In this unique one-woman show, Smith dramatized the accounts of students, parents, teachers and administrators affected by American’s school-to-prison pipeline, which pushes underprivileged, minority youth out of the classroom and into incarceration.

The tour-de-force performance was captured for HBO Films and focuses on the lack of opportunity and resources for young people living in poverty, which often leads them into the criminal justice system. Smith fearlessly brings to life the stories of 18 real-life people in the show, among them current and former inmates, protestors, educators and politicians. Shining a light on a lost generation of American youth, NOTES FROM THE FIELD is an expression of community, positivity and, ultimately, hope by inspiring awareness and change.

If the message above, taken from an HBO press release, isn’t enough to draw someone to see this performance than see it for the amazing talent that is Anna Deavere Smith. She not only borrows the words of real people, but she herself interviewed those depicted and doesn’t just recite back those words, but takes on the persona of the speaker in tone accent and mannerisms. She delivers a solid read of each and every one. Here is the trailer:

These moments are just some of the stories from out on “the field.” What is here is not the whole story, it is not the story from even all sides of the issue, but they are powerfully told stories of what it is like out there. Many struggle and hope for something better and many just don’t do a damn thing. The system in places tries & wins and other times tries & fails (we hear about it too) 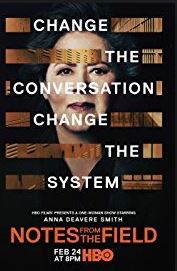 and sometimes the system doesn’t try very hard at all. And the struggle continues and the pipeline straight to crime and jail is there. It is through Smith’s personifications that we are reminded that it is all in play. She has tackled the issue through interviews, research and writings and boiled it down into this delivery. It is a powerful one and it is a complex one that does not need to get tangled up in background noise or anger or jarring images. It just needs the words told simply and effectively. NOTES FROM THE FIELD accomplishes that.

Again, it is not all sides of the story. It is the collection of words that this writer/actor/activist sought out to illustrate the continued downward decline of society and the faith & hope we have, black and white, rich and poor, that we can rise above in time. Take from it what you will, but it is a strong message and an effective example of theater done right.

HBO Films: NOTES FROM THE FIELD debuted on Saturday, February 24 and can now be seen on HBONow/Go and HBO On Demand.