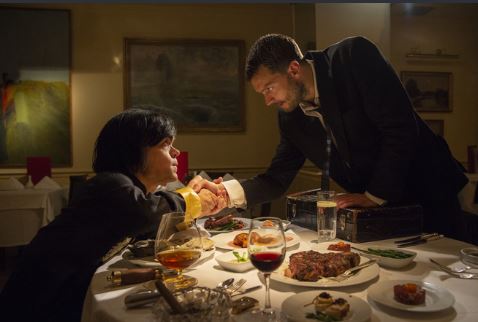 Straight up front, I have got to declare before anything that, MY DINNER WITH HERVE was fun insightful and moving and anyone who thinks otherwise is just wrong.

But, it wasn’t perfect. Hmm, what to say here without spoiling the story is the trick. Well, the story is a simple one: a down-on-his-luck writer for a British magazine, named Daniel Tate, gets a U. S. assignment to interview novelist Gore Vidal. He ends up botching that job-saving stint because he was also to interview Hervé Villechaize for a fluff piece. What unfolds between the two is a wild, eye-opening time for both. Mr. V. promises Tate just the opposite of a fluff piece. He promises the story of his life that will get Tate the best journalistic story of his.

Be forewarned. My style is to review not recap so, I’m not going to walk the reader scene by scene through the movie or give spoilers if I can help it. I want you to seek the movie out for yourself. 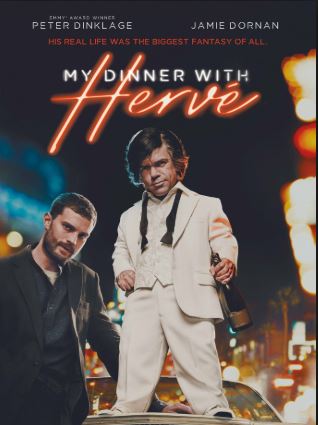 So, the TV-movie does a time jump back and forth to tell Mr. V’s story. It takes us to his childhood years, to his arrival in America, to his stint as Nick-Nack in The Man with the Golden Gun, to his stint as Tattoo in Fantasy Island, through the start & the end of his marriage and the end of his career and worse. He tells Tate all this on a wild night in L. A. that started with dinner and led to a strip club, a long, winding & sometimes dangerous limousine ride and even a stopover at the old Fantasy Island set. Some find the cinematic device of toggling between the past & the present can be confusing that was not the case here. His whole life wasn’t told, just the highlights but the whole juxtaposition of the scenes made the story that much more interesting.

For those actually old enough to remember Mr. V and his filmography seeing these moments are fun. Andy Garcia did not embody Ricardo Montalban well enough for me, but it isn’t his story so it is tolerated. Perhaps if the scenes with Montalban were just a cameo moment, instead, but his presence and that chapter in Hervé’s life were too important to gloss over, so Gracia got more screen time. His portrayal was the biggest snag. Jamie Dornan’s portrayal as Tate was better. He is not my favorite actor by any means, but I think this piece has been his best role to date. And then there is Peter Dinklage. Though his visage is nowhere close to Herve V.’s look he certainly nailed the vocal quality. And man, Dinklage can act with his eyes. He drew us into Herve quite easily. 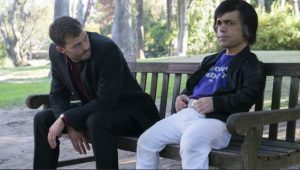 What really sells MY DINNER WITH HERVE is the emotional journey of both main characters and the themes the show exhibits. I don’t think I am giving anything away by saying that’s Hervé’s time with Daniel or Junior, as Mr. V. calls him, is a cry for help, a need for understanding. The interview that comes out of it creates a friendship and serves as a suicide note. The themes are strong and leave you thinking. Herve expressed in his interview rants that he felt that the fame, fortune, rich food & women were gifts from God in exchange for the dwarfism he endured. His intent then was to enjoy those gifts to the fullest, no holds barred. In the end, he learned that all that isn’t what makes life worth it. He wanted the love, friendship and understanding because that is what matters in the end.  Daniel sticks with Hervé, throughout their wild exploits because he identifies with him. You’ll learn that they both dealt with things in their lives that they had no control over and look where it got them.

These themes didn’t bowl the viewer over. They played out bluntly but still managed to come out in a subtle way. Dinklage’s French mumble made you hang on every word as he expressed the real story, the real inner feelings of Hervé. And as good as Peter Dinklage’s performance I wish the real Hervé Villechaize was there to tell his own story.

HBO Films: MY DINNER WITH HERVE is now playing across HBO platforms.