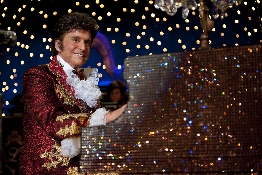 HBOWatch has been fortunate enough to obtain an advanced copy of HBO Films: BEHIND THE CANDELABRA for review. The street date of its release, in both Blu-Ray with Digital Copy and in DVD format, will be Tuesday, September 17, 2013. More details about the discs after a bit of a recap.

As glittering and outrageous as Liberace himself, this movie takes a look at the flamboyant entertainer’s private world, focusing on his tempestuous relationship with Scott Thorson, his young live-in lover for five years. Based on Thorson’s tell-all memoir Behind the Candelabra: My Life with Liberace, the film is directed by Academy Award winner Steven Soderbergh  and features electrifying performances by Academy Award winners Michael Douglas as Liberace and Matt Damon as Thorson. Before Elvis, before Elton John, Madonna and Lady Gaga, there was Liberace: virtuoso pianist, outrageous entertainer and flamboyant star of stage and television. A name synonymous with showmanship, extravagance and candelabras, he was a world-renowned performer with a flair that endeared him to his audiences and created a loyal fan base spanning his 40-year career. Liberace lived lavishly and embraced a lifestyle of excess both on and off stage. In summer 1977, handsome young stranger Scott Thorson walked into his dressing room and, despite their age difference and seemingly different worlds, the two embarked on a secretive five-year love affair. The HBO Film captures the essence of Liberace’s appeal, while reminding viewers how different attitudes were at the time, as he and his management fiercely protected his public persona. 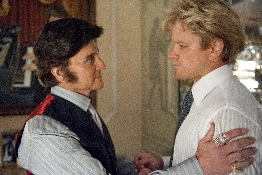 This movie with all the right people behind it became of quick interest to both HBOWatch and, evidently, HBO viewers alike. Quite a bit of publicity, marketing and controversy surrounded this production. Big names were attached to it both behind and front of the camera; no expense was spared in its production value and it also gained attention not just on HBO but around the world. HBOWatch covered it a few times from its pre-production days through its premiere on the channel on 05.26.13. During its premiere, the film became one of HBO’s most watched original films in nearly 10 years.

This site first reported on the movie on 10.11.11. As to keep the production a surprise, we guess, little information came out about the film. Occasionally a few photos were offered. We got a glance of them on  10.14.12, on  01.18.13  and  on 02.08.13. A premiere date was announced here on  03.03.13 and a review of the movie was posted on 05.27.13. BEHIND THE CANDELABRA was well received at the Cannes Film Festival and in cinemas around Europe. In this country it has even garnered Primetime Emmy nominations for both Michael Douglas and Matt Damon for Outstanding Actor in a Miniseries or Movie and one for Outstanding Miniseries or Movie. Those were just the big categories; in all it has fifteen nominations!

Now, who wouldn’t want to own for themselves this glittery, glitzy movie full of powerful performances and production value?

HBO Films: Behind the Candelabra

Note: If you never obtained a Digital Copy of HBO content it is quite easy.  Included in the disc packaging is a paper that explains it in three steps.    Just go to hboselect.com and follow the steps and provide the authorization code provided on the paper and download your programming.

Extras: Only one Extra is included regardless of which format is purchased.The piece is entitled The Making of Behind the Candelabra: which explores the legacy of Liberace through costumes, sets, locations and prosthetics with several cast and crew including Douglas & Damon. I suggest watching the extra first as an introduction to the persona that was uniquely Liberace and his bedazzling world. Again, HBO Films: BEHIND THE CANDELABRA is not out in retail until 09.17.13 but, if you want to insure this movie is in your library then you can pre-order from such sites as the HBO Store and [amazon_link id=”B00D2CYU2W” target=”_blank” container=”” container_class=”” ]Amazon.[/amazon_link] Enjoy BEHIND THE CANDELABRA.