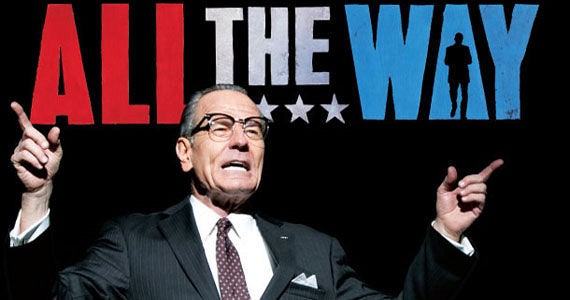 Much like Steven Spielberg’s 2012 film Lincoln, HBO’s adaptation of the Broadway hit play All the Way focuses on the role a President plays in the advancement and expansion of human rights. It is a role often caught between the tide of human progress and the regressive Old Guard. How much can one person do, given the checks in the system? What is the best approach to push forward a party’s agenda? Films like Lincoln and All the Way highlight the struggle between the radicals and the moderates within a party, often chiding the latter for their impatience and lack of tact and pragmatism. 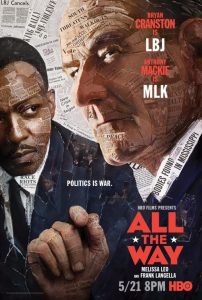 esident is Lyndon Baines Johnson, the “accidental president,” who seemingly stumbled into power when John F. Kennedy was shot by an assassin in 1963. Of course, there is nothing accidental in LBJ’s rise to power; he was a man that craved it, a politician who actively pursued the highest office in the land. He felt slighted when he younger Kennedy was chosen as his party’s nominee for the 1960 Presidential election, and his feelings of resentment did not ease when when ascended into the Presidency. In fact, the first 24 hours of LBJ’s presidency were marked by a battle of wills between him and the Kennedys, as he tried to cement his leadership over his party, even asking the blood-soaked, traumatized Jackie Kennedy to witness his Oath (and ensuring that the moment was photographed for posterity).

All the Way opens with Kennedy’s assassination. Johnson immediately calls on his advisors to convene Congress for his first address as President. During the speech, Johnson assures the public that he will see Kennedy’s proposed Civil Rights legislation through into law. This immediately draws the ire of the “Dixiecrats,” the wing of his party which had long held the South through their support of racist policies and voter suppression, suppression which the proposed legislation would criminalize. Johnson counts the “Dixiecrats” as his friends, particularly Senator Richard Russell, Jr. (Frank Langella), and feels he can persuade them to his side, if he proceeds slowly and with caution. On the other hand, he is facing pressure both from the liberal wing of his party, exemplified by Hubert Humphrey (Bradley Whitford), and by Civil Rights activist Martin Luther King, Jr. (Anthony Mackie) to deliver results, and deliver them quickly.

In the title role, Bryan Cranston conveys the multiple and sometimes contradictory levels of the LBJ’s personality. He was a complex man, a figure who rose out of extreme poverty, and was passionate about its eradication. He had genuinely lofty ideals for America. On the other hand, his ambition was large, and he was not above dealing with some of the more unethical (racist, bigoted) members of Congress to get what he wanted. He was crass, he was disrespectful, he was insecure, and he was a bully. He was also shrewd and knew how to get people on the same page. He was a man who was literally large, and who had a large personality, but who could also be small and petty onto others. Having played the role on Broadway, Cranston has learned to embody the tics and nuances of LBJ’s physicality and speech, but he also gives an inner life to the man, particularly in scenes involving the President’s family.

At the same time, LBJ was not the only player in the political landscape of the time. When a work based on history focuses on one figure, it risks minimizing the contributions of other players in the game. If All the Way has one shortcoming, it’s the reduction of parts played by people such as MLK, Malcolm X, and the liberal wing of the Democratic Party. Anthony Mackie and Bradley Whitford do their best with largely thankless parts, for they exist to bullied, belittled, and lectured by a frustrated LBJ. Mackie lacks the gravitas of MLK, but at least he’s given scenes to exist as a character outside of the President’s presence, thereby adding brief moments of agency to the role. Whitford receives no such moments, and therefore is not allowed any moments to stand out. Far more interesting (in a far more challenging role) is Frank Langella, who gives a layered and sympathetic dimension to a person who was on the wrong side of history.

The film is directed by Jay Roach, who previously worked with Cranston on Trumbo, and whose history with HBO includes Recount and Game Change, superb films about the current political climate in Washington, DC. Though Roach managed to make Robert Schenkkan’s play more cinematic (ex. taking some of the scenes outside, or setting them during a ride through the countryside) in this outing, the film lacks the punch, of say, Election Night 2008 in Game Change. Its compromised central character passes historic legislation, but he remains very much compromised, as opposed to triumphant or defeated. In this sense, All the Way functions more as a character piece than a plot-driven narrative, but nevertheless remains compelling due to the powerful performances at its center.

Robert Schenkkan’s follow-up to All the Way, titled The Great Society, has not arrived on Broadway, nor has it been announced by HBO, but it would be an interesting piece to see in conjunction with All the Way, perhaps enhancing its impact by completing the tale of the Johnson presidency. I hope Roach and HBO can tackle that play eventually. As for the transformation of All The Way into a classic HBO Films presentation? Well, Bryan Cranston owns it.