Overview: Filmed over the course of three years in eight countries on three continents, TALES FROM THE ORGAN TRADE reveals a world where “villains” often save lives and the medical establishment, bound by its own rules and bureaucracy, too often watches people die. From a village in the Philippines, where more than 300 men have sold a kidney for the price of a laptop, 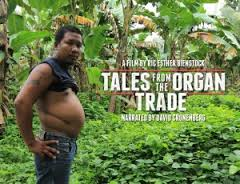 to an unemployed American who answers a Craigslist ad to donate his kidney for a $25,000 payoff, the film pulls back the curtain on this lucrative illegal business. This documentary exposes the shadowy black-market world of organ trafficking, from the street-level brokers who solicit organs and the rogue surgeons who perform the transplants, to the impoverished donors willing to sacrifice a part of their bodies for a quick payday and the desperate patients who face the agonizing choice of obeying the law or saving their lives.  It is directed by Emmy winning filmmaker and investigative journalist Ric Esther Bienstock and filmmaker David Cronenberg narrates.

Expectations: I have been waiting for this documentary to come along. It was originally on the schedule in 2012, actually at this time of year, and it got bumped and never aired then. Well, it is back and I am most eager to see it.

At first I wasn’t sure exactly what this was about. When it first came to my attention I thought it was more about the cases of organ trafficking in which unwilling victims are kidnapped, and an organ harvested in a totally unsanitary locale after being chilled in an ice cube filled bathtub or some other horrible scenario. However, since reading the overview I was given from HBO PR and seeing the trailer I have learned that that is not what plays out here. Instead we will hear stories about willing donors selling their body parts out of desperation. It may not be as awful as the person robbed of a kidney but it still a nasty business.

It is a nasty business I care to examine. My mind fills with questions of what drives the decisions; how legal and capable are the medical staff involved; how well do the impoverished survive surgery, healing and being minus a kidney; do any of them actually improve their status after being paid off; what is being done to stop the vicious cycle and on and on.

I guess I expect this documentary to pretty much be the definitive report on the Organ Trade. I’ ll see if all my questions get answered.

Gut Reaction: Oh, yes they did each and every one. In 83 minutes this film covered every angle. I guess people don’t need to kidnap people to get a big payoff because there is obviously willing and desperate donors everywhere. I like how TALES OF THE ORGAN TRADE is structured. It quickly sets up the scenario and then, with the assist of some graphics play, plots out the trail we must follow to understand how the life changing process plays out. We go from a recipient’s quest and learn of the doctor, the fixer, the broker and to the donor (at least in one case). It was interesting to find most of the donors with no regrets; doctors and fixers being steadfast in believing they did no wrong and recipients fighting for their lives. Then it throws in the moral and ethical issues. Think about it – donors sign consents willingly, yet they are trained in what to say and do. They get paid, but they can’t say they are doing it for monetary reasons and those in need of an organ are just doing what they need to survive.

All this makes a fascinating story perfectly narrated by Mr. Cronenberg. It offers an investigation, a medical story and personal stories. It is controversial, emotional, scary and unjust but more so is truly a story of desperation. The feeling of desperation is one of the strongest emotions you can play out in my opinion and this one does it well.

In Conclusion: TALES OF THE ORGAN TRADE delivered what I had hoped for and answered the questions I had asked. It is the definitive report on the organ trafficking business. It couldn’t have been explained better. Feel free to disagree in the comments below.