Overview: In 1998, Dr. Leslie Gordon and Dr. Scott Berns learned that their two-year-old son, Sam, had progeria, a progressive aging disorder so rare that fewer than 250 children in the world had it at the time. Little was known about the disease, and all children with progeria died of heart attack or stroke at an average age of 13. LIFE ACCORDING TO SAM explores the remarkable world of Sam Berns and his family. Now a high-school junior about to turn 17, Sam embraces his circumstances with admirable courage, showing wisdom beyond his years. 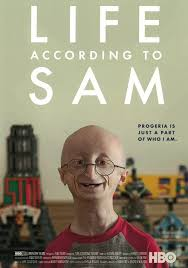 When Sam was diagnosed with progeria, Leslie was a resident intern. With the support of her husband, Scott, a pediatric ER doctor, and the rest of her family, she devoted herself and her career to studying the disease and thus, The Progeria Research Foundation was founded. Through the example of their own son they tell us of the work they are undertaking to cure the disorder.

Expectations: I am slightly confused with the angle this film takes. In the little documentation that I read about the documentary the approach seems to be more about the medical history behind the disorder and the research done on it, yet the footage I have seen as promotion of LIFE ACCORDING TO SAM focuses on Sam and his positive outlook on his life and situation. The title, obviously, indicates that this is about the day-in-the-life experiences of the afflicted youth. So, I am left unsure of what direction the piece really will end up taking the viewer through.

The documentary is 95 minutes long. That seems like a long time to examine what fills Sam’s days and what he feels and thinks about progeria impacting his life; about the medicines or treatments he may take; about how he fits in society and how society treats him. On the other hand, if the work is a very clinical scientific examination of the disorder with Sam as merely the elected soul to be the face of progeria then it might be a rather dry documentary. For myself, as a scientifically minded person, I wouldn’t hate the medical explanations of the disorder but I don’t think the majority of the viewers would want an hour and a half discussion filled with medical jargon and lab results.

So, I think and hope this presentation needs to be a balance of both sides of the story. It needs to explain progeria and the steps taken to find a cure or ease the condition and also offer the personal story of Sam Berns. The combination of both angles will make a more engaging documentary. It is time to watch and learn.

Gut Reaction: Why did I even raise the doubt. Directors Sean Fine and Andrea Nix Fine’s, whose documentary “Inocente” won the Oscar for Best Documentary Short Subject earlier this year, blended the medical facts and the personal story just fine. Viewers get into the study of progeria through Sam Berns and other afflicted children. The people motivated, as stated in the Overview, are Sam’s parents. His mother Leslie talks us through the steps of the disorder and the clinical trial procedure and the frustrations she has endured as a medical researcher and a parent. An all access presence of the camera takes us through the process. 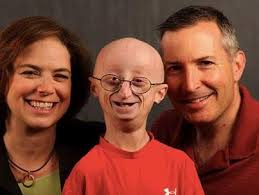 The personal story of Sam sews the piece together into a compelling piece. His personality and his outlook on his affliction and death are amazing. It is his demeanor and the outcome of the medical testing that encourages those involved to continue the cause and shows the viewer that there is hope for for progeria sufferers.

The only complaint that I had is that I dislike the need some filmmakers have of adding artistic moments into a piece. A 95 minute film is just the right length; I want to see the facts and issues unfold so don’t fill it with unnecessary footage. In order to strike a dramatic chord or to let facts settle in your thoughts for a minute there are shots of microscopic images or Sam’s Lego collection just placed to give us time to reflect. They are okay when used sparingly; this piece pushed those moments to their limits.

In Conclusion: Sam Berns’ life is worthy of examination. He is a unique individual and not just because of his rare disorder. Also, the work, understanding and persistence of his parents are admirable. I can without hesitation recommend LIFE ACCORDING TO SAM.