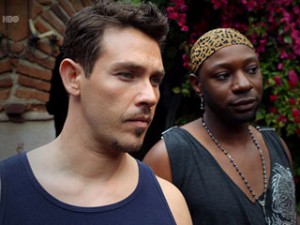 True Blood is the most inclusive show on TV with six regular or recurring lesbian, gay, bisexual, or transgender characters, according to GLAAD’s annual “Where We Are on TV” study. HBO features the greatest number of LGBT characters on cable with a total of 10 for the 2010-11 season. ABC leads the broadcast networks with 11 LGBT characters out of 152 total series regular characters (7.2 percent). (CBS is in last place with just one regular.) ABC Family also finishes near the top of the scorecard with seven regular LGBT characters, which ties it with Showtime.

Check out the complete lists of LGBT characters on broadcast (a number that has increased to 3.9 percent, but still doesn’t include a black character — get on that, Glee) and on cable. For people who love charts, GLAAD breaks the numbers down further and includes stats on racial diversity on scripted broadcast series. NBC leads the way there with 32 percent of regular characters being people of color. ABC (26 percent), Fox (24 percent), CBS (18 percent), and The CW (10 percent) follow. For the first time, the study also looked at the number of characters with disabilities. According to GLAAD, slightly more than 12 percent of U.S. citizens reported an apparent disability in the US Census Bureau’s 2008 American Community Survey. This season, only six series regular characters on the broadcast networks, or 1 percent, are people with disabilities.