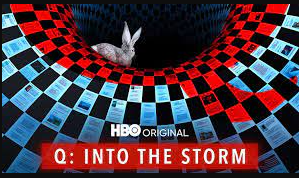 Overview: Spanning three years in the making and traversing the globe, the series follows filmmaker Cullen Hoback on a labyrinthine journey to uncover the forces behind QAnon, a movement fueled by conspiracy theories that have grown in scope and political significance. gains unprecedented access to key players including Jim and Ron Watkins, the father/son team behind the 8chan website, the site “Q” calls home; explores their rivalry with Fredrick Brennan, the original creator of the platform all the while examining the connections between QAnon and President Trump. Debut date: March 21, 2021.

Expectations: I’m pretty clueless when it comes to Q. I’ve known of the whole thing as it has circled around President Trump and that is the extent of it. In fact, where I live, there are plenty of Trump supporters but I haven’t seen any Q trappings about. Does it really take six hours to educate me on the matter? Besides, I don’t recall any sensational news bits that Q had been revealed so, by the completion of this film the answer on just who is Q must be only strongly suspected but never proven, right? And I’m sitting in the camp who wouldn’t care if he was.

Gut Reaction: First of all, let me say I sounded pretty disinterested going into this but am duly educated now about the faction and the whole investigation grew on me. found it interesting. But what I was most drawn to in the series was not what was being addressed. The show focuses on the history of Q and the creation, via an onscreen timeline, of key entries from Q and how those entries energized a movement. The main focus, however, is of Jim and Ron Watkins and their rivalry with Fredrick Brennan. As the Overview says, the site Brennan created but the Watkins oversee was Q’s home base. Via many interviews we learn of Q’s impact and of the possible identity – not spoiled here.

What intrigued me more was not as well explored. The whole QAnon movement is attached to conspiracy theories that followers hold as fact. The series spells out some of the theories starting with PizzaGate and moves on from there. Though followers of Q’s thread have been utilized and interviewed for this work, more time spent with those people would have been more interesting than with the Watkins. To me, the cryptic messages from an anonymous sender is not as interesting or as dangerous as the people who consume, interpret and hold unwavering belief in what metastasizes from it all. The people who believe Hilary Clinton cannibalizes infants in a pizzeria is fucking scary. Their mindset would have been a lot more interesting to me than want we ended up getting. But it was a great primer into the whole mess.

On Conclusion: It was a good primer into the Q mystique, but it was far too muddled in its focus, and for me, didn’t focus on the most interesting aspect. However, it was indeed interesting for its length.