Overview: Set amid many of the defining events of the past four decades, The Defiant Ones tells the stories of Jimmy Iovine and Dr. Dre — one the son of a Brooklyn longshoreman, the other straight out of Compton — and their improbable partnership and surprising leading roles in a series of transformative events in contemporary culture. From director Allen Hughes (Menace II Society) this revealing, compelling and often-gritty story takes place in recording studios, in humble homes and massive mansions, in criminal courts and in the highest corridors of corporate power. 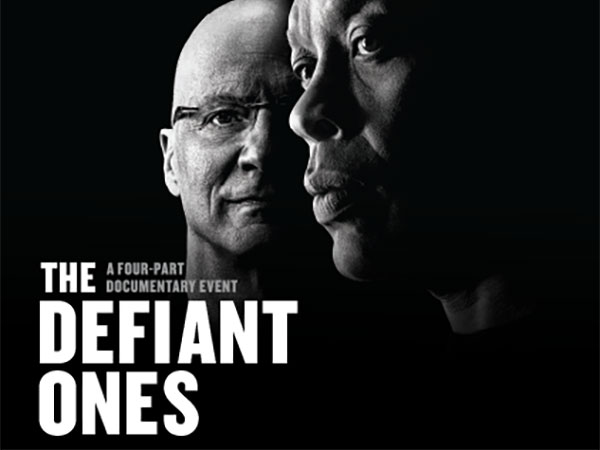 The four-part documentary event is told with the help of many of the most notable artists and figures of our time, reflecting Hughes’ unfettered access to Iovine, Dre and the remarkable cast of figures who have been a part of their success story. In addition to extensive interviews with Dr. Dre and Jimmy Iovine, who speak frankly about their highs and lows, the show includes interviews with such music icons as Bono, David Geffen, Eminem, Nas, Ice Cube, Gwen Stefani, Jon Landau, Tom Petty, Trent Reznor, Snoop Dogg, Bruce Springsteen and will.i.am. The series also features never-before-seen footage from a multitude of recording and writing sessions with Eazy-E, JJ Fad, Stevie Nicks, N.W.A., Tom Petty, Bruce Springsteen and U2, among others.

Expectations: With all the musicians listed to be a part of this smartly packaged documentary event it is sure to be an earful. The hype for this four-parter has been huge with plenty of video clips and advertisements have been dropped regarding. Through the collaborative effort of Iovine/Dre was not on anyone’s radar as a story to be told this looks like it will be the one and only definitive look into the musical empire they have built and be a solid soundtrack for our times. I’m hoping for something good!

Gut Reaction: I’ll confess it took me a while to get around to watching all four segments of this documentary event. It was crafted to be shown by HBO in four parts and that is how I viewed it as opposed to watching it all back-to-back in one sitting on HBOGO. The music business of Jimmy Iovine and Dr. Dre was never something I made attention in. Come on, just how many music producers does one recognize and follow? Sure, you know the artists, but the craft masters behind them?  I can rattle off Quincy Jones, Berry Gordy, George Martin, Nile Rogers, Mutt Lange and Jay Z and a few others, but you never really connect them with how much influence and creativity they put into the process of making & shaping an artist and/or an album until THE DEFIANT ONES spells it all out for you. Well, done for this documentary for doing just that. 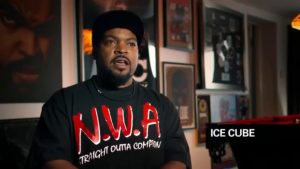 Part One at 56 minutes long starts us off with the early careers of Iovine and Dre.

Before he became Dr. Dre, Andre Young’s involvement in Compton’s music scene connected him with Ice Cube, MC Ren, DJ Yella, and Eazy-E, forming what would eventually become N.W.A.Meanwhile, young Jimmy Iovine dropped out of college and hustled his way into gigs with John Lennon, Patti Smith and Bruce Springsteen on his way to becoming a sought-after engineer and emerging producer.

Part Two clocks in at 1 hour 8 minutes and illustrates that it was not a fast and easy path for the two producers.

Dr. Dre’s formation of hip hop supergroup N.W.A. brings forth the seminal hip-hop record Straight Outta Compton. Though Dre’s creative direction is integral to the group’s success, his relationship with the original N.W.A. contributors, especially Eazy-E, deteriorated due to artistic and financial conflicts. Jimmy Iovine’s work on highly successful albums from Tom Petty, U2 and Stevie Nicks reveals his knack for production and collaboration. But his massive workload and tumultuous personal life lead him to reevaluate his future in the music industry. 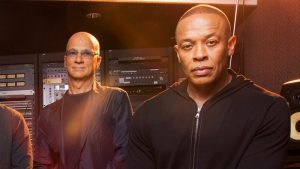 Part Three, the longest segment at 1 hour 22 minutes, shows the teaming talents dealing with the law and censorship over the raw and controversial music they were generating.

After leaving Eazy-E and Ruthless Records, Dr. Dre’s independence results in his debut solo album, The Chronic and the start of his noteworthy collaborations with Snoop Dogg and Tupac Shakur. But Dre’s artistic success came with numerous challenges, including growing cultural and political concerns about the explicit content in his music. Jimmy Iovine’s transition from music producer to music executive gives him an opportunity to utilize his eye for talent and business savvy, culminating in his creation of Interscope Records and signing Dre. However, Jimmy’s partnership with Dre and Interscope’s provocative roster of musicians means absorbing their problems with the law.

Part Four concludes after 1 hour. It proves that this producing powerhouse is still going strong as it adapts to the sign of the times and the industry.

After cutting ties with Death Row Records and Suge Knight, Dr. Dre starts Aftermath Records, (an imprint under Interscope) and discovers Eminem, producing him to international success. Though Jimmy Iovine and Dre continue to produce a top-tier roster of talent, structural changes in the music industry force them to innovate their business model, leading to the creation of Beats Electronics and their flagship product, Beats By Dr. Dre.

This sit-down moment-by-moment talk about the industry, the inspirations, the collaborations, the ingenuity and the defiance to get it all just right was a real treat to watch. But, truthfully, if I had to sit down and watch from start to finish in 3 hours 30 minutes my mind might have wandered. But this event was packaged right. Now, I don’t know if Iovine/Dre had d their hand in presenting this work in that way or not, but it wouldn’t surprise me. As THE DEFIANT ONES prove they are at the top of their game.

If you love the music process and the history of shaping just one of the musical soundtracks of our times you can’t get much better than this.

Bonus: Here are just two of the many clips dropped offering a snippet of what is inside. Listen up.

In Conclusion: I don’t know if I can single out any one single moment from this piece that defines what it is all about. Perhaps someone can in the comments below. What I can say is hearing the artists speak about these two men behind the desk, in the sound booth and mixing board share a common theme. They were working with genius and it was electric, raw, exciting innovative and balls out awesome! And, for me, watching it was too.

Next: Nearly 20 years after the death of Princess Diana, her sons and heirs, Prince William, Duke of Cambridge, and Prince Harry, look back on her life and work in DIANA, OUR MOTHER: HER LIFE AND LEGACY. It debuts Monday, 07.24 at 10:00pm.