Overview: Runway model Sandra Bush dreamed of becoming the first African-American supermodel, only to struggle with addiction and despair. But she later achieved celebrity as Mama Bush, the model for some of the best-known and widely admired paintings by her daughter, acclaimed artist Mickalene Thomas. Inspired by her mother’s years of struggle, Thomas asked Bush to pose for a series of sexy, suggestive portraits evocative of ’70s pop culture. The photographs served as the basis for some of Thomas’ most acclaimed paintings and Bush became a muse to her daughter. 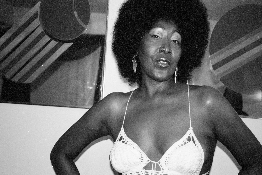 Drawing on personal and archival photos, as well as intimate interviews, Thomas’ vivid, loving portrait chronicles her mother’s personal and professional struggles. In her film directing debut, Thomas also paints a poignant portrait of her mother and artistic muse, presenting a tender look back at a lifetime’s worth of hopes, regrets and redemption. HAPPY BIRTHDAY TO A BEAUTIFUL WOMAN debuted Monday, 02.24 from 9:00pm – 9:30pm.

Expectations: This is one of those films where an artist has the resources and talent to pick a close family member and document them. It happens quite often. For example we have already seen and reviewed FIRST COUSIN ONCE REMOVED by Alan Berliner, Beyonce also did it and Robert De Niro has one (coming to HBO in June) as well. They all turn the camera onto their relatives and/or themselves. The question lies on whether their family member is worthy of the cinematic telling or is it just a famous person getting to do what they want. HBOWatch believed that Beyonce’s film chronicle fit the latter. Berliner actually offered an interesting piece. Now is Thomas’ opportunity to prove that her mother’s story can hold an audience.

Gut Reaction: So, can this film hold your attention? Yes, it can and not just because it is only 24 minutes long. It would seem more fitting as maybe a documentary to be seen around Mother’s Day perhaps as this is a tribute to a mother, though an indirect one. The film maker does not say it is such, but it clearly comes across as one. 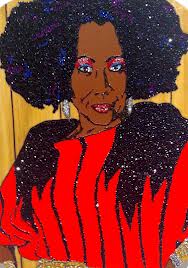 What it is actually is a series of questions stated on film by Mama Bush’s famous daughter and the subject’s responses intercut with photos, films and music. And though we don’t get persistent questioning or lengthy answers about the suffering in Sandra’s life we get enough to understand her life. She was a woman of hopes, dreams and beauty and a woman of substance that I felt was nice to have met via this film.

As for the art of Sandra’s daughter Mickalene Thomas I have to admit that I was unfamiliar with it, but it sure did capture the essence of her mother. It all proved as nice a tribute as you could expect.

In Conclusion: Sandra Bush died in 2012, shortly after Thomas completed filming of HAPPY BIRTHDAY TO A BEAUTIFUL WOMAN. The title of the film comes from a request she made for her 50th birthday celebration, when friends asked what should be written on her cake. Bush recalls in the film, “I said, ‘Put on there, “Happy birthday to a beautiful woman.”’ And that’s what they did.”