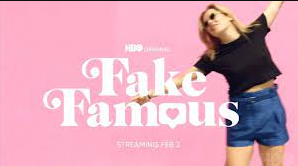 Overview: FAKE FAMOUS, from first-time director and veteran journalist Nick Bilton, explores the industry of social media influencers through an innovative social experiment. The film’s journey into this world is driven by the casting of three people in Los Angeles who all have relatively small social followings and the attempt to grow them into famous influencers. By purchasing fake followers and an army of bots to “engage” with their social media, the newly made “influencers” discover both the wonders and costs of this unlikely, immersive lifestyle. Peeling back the layers to reveal what’s really happening behind the scenes of influencer fame, FAKE FAMOUS illuminates our obsession with the numbers of likes, followers and favorites we get, and how most of our online world is much more fabricated than we realize.

Expectations: Right out I can say I hate the topic. I don’t even understand the draw of so-called ‘influencers’. But then again, I’m not addicted to social media. I don’t even own a cell phone let alone being set up with all those social accounts. Why are people drawn to these unknown hustlers, to begin with? I don’t get it and I guess that really means that perhaps I am the wrong person to address the topic. Nevertheless, here I am and I hope I can tolerate it.

Gut Reaction: Well, what do you know, I tolerated all 1 hour 27 minutes of it. It wasn’t so bad. The trailer set me up fairly well for what I was getting into. See, I was afraid I was going to get a strong dose of the super successful “influencers” and how they are all that and their tricks of the trade and I just didn’t want to give them any more undeserved fame than they were already getting. I know, what a jerk I am. What saved this documentary for me was the whole fact that Bilson was doing a social experiment and along the way exposing the tricks of the trade. Yeah, that made it more palpable.

He auditioned and chose neophytes in the game and proved how, with the proper tools, anyone could become fake famous. It proved interesting enough, though I still dislike the whole notion. I am also glad Bilson defined the true fakeness of the whole damn process. I suspected as much that it was happening across the board and this clinches it. These scammers are creating fake locales, they are buying fake ‘likes’, which is the currency they crave to make them ‘famous’ and, if they are really good, they get free gifts of clothes and memberships because of their ‘fake famous status.’ The whole experiment and film confirmed by opinions and drew a strong case that it is all a scam because people want to be famous.

Conclusion: If you want the real truth about the whole rigamarole then this is a documentary worth seeking out. I’m glad I did because it reaffirmed my desire to avoid the whole scene. Feel free to disagree in the comments below, but sorry there are no “likes” or “dislike” to click on here.