Overview: Feisty, fiery, tough, unafraid, a force of nature…and funny as hell. These are a few of the terms that were used to describe Ann Richards, one of the most charismatic American political figures of the last 30 years. This compelling portrait tells her remarkable story, from the young girl who grew up poor in rural Texas to the beloved national icon and Democratic leader who rose to power in a conservative stronghold. ALL ABOUT ANN features interviews with close friends, family members and admirers, including former husband David Richards, daughter Cecile and son Dan, Bill Clinton, Nancy Pelosi, Dan Rather, Tom 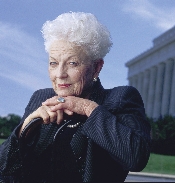 Expectations: Sometimes I just don’t know what drives people to watch documentaries on certain subjects. This film is a case in point. If you are young enough then you have no clue who Ann Richards even was, so if is safe to say this documentary would not even attract your interest. What it takes to be interested in ALL ABOUT ANN would have to be those that hold in interest in politics, strong iconic women, feminism, biographies or have an interest in just being educated on a myriad number of topics. Oh, or you are a proud Texan.

I’m watching ALL ABOUT ANN because knowledge is a good thing and because it is a part of my job to do so. I remember Ann Richards in the news but can’t say I remember one damn thing she did worthy for Texas or a single sound bite of note. Obviously, the producer and/or director are Texans, right? Oh, I have no idea and it certainly doesn’t matter one way or the other. Here is the official trailer for the documentary. It quickly sets up, from the words of her daughter, what kind of woman she was and the documentary will cite historical examples to back it up. Let’s go for it!

Gut Reaction: ALL ABOUT ANN is certainly a through documentary. It covers a lot of ground about the life and career of Ann Richards. It offers many a picture and video, news reports, talking heads from the political scene of the day and friends & family offering memories and testimonies. A top notch biography really, but a bit numbing for so much is packed into this 84 minute piece. The biggest challenge, like I mentioned, is just to convince yourself that you want to commit to the biography in the first place. For those of the right age there are many a moment of recollection and for those unfamiliar you get the complete picture of this lady. If you can stick this film through to its end you will have felt as though you met the woman and were impressed by her.