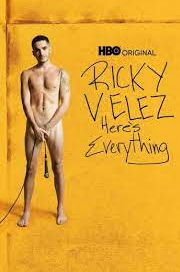 I have been in the mood for some standup comedy. I know I have stated this before but I used to watch it all the time when HBO was flush with all those comedians who are now considered the classic greats. What can I say, I miss George Carlin. So, anyway, whenever a special comes on the schedule I’m sure to see it and lo, and behold a young buck by the name of Ricky Velez has stepped up to the mic before HBO’s cameras and it was just in time because, like I said, I was in the mood for some shtick.

I have to admit that I never heard of this guy but he has a profile. An HBO press release states, “New York City-based stand-up comedian and actor Velez is best known for acting and co-producing Judd Apatow’s “The King of Staten Island,” which premiered in June 2020. Ricky was a correspondent on Comedy Central’s “The Nightly Show with Larry Wilmore,” and has appeared on Netflix’s “Master of None,” and Comedy Central’s “This Week at the Comedy Cellar.” Named one of Variety’s “Ten Comics to Watch.”” He is before the cameras, taped in August at Brooklyn Steel in New York City, before a live, COVID-19 protocol-compliant audience. And he opens up & and unloads his comedic style and himself.

In HERE’S EVERYTHING he plays it up that he is nothing special; that he is poor, slow and dumb. His opening remark sets it all off – “I’m coming to terms with the idea that my brain does not work correctly.” And then he sets off just what thoughts are in there. Some thoughts are honest & revealing; some just so odd you can’t help but laugh. He maintains that persona in his set, though he likes to give a smile and a little laugh through his own jokes. As for those jokes, he often starts them by making a simple statement like “Old people are no longer necessary” and then begins to tell us why. Another is “I will not like your ugly baby” and tell you why. His best riff, for me, was a drug dealer trying to get to him on a prohibitive Dominican Republic beach.

This special is all over the map because it seems that is the way his mind works, but that doesn’t mean it is a mish-mash of whatever. It flows, it makes you listen hard, then makes you chuckle. Yeah, just a chuckle, really. The only thing I wasn’t so keen on was how he packaged it. The poster reads to us as he bares all, but he doesn’t. The show’s title states the same thing, but he doesn’t. I’ve seen gigs from others that exposed more of their true selves than this. Thank goodness we get a good dose of Velez’s process and life to make us laugh, but I think there is more he could expose and I hope one day to get it. So, how about HBO Comedy special #2, Ricky?