Hey, I was able to catch this comedy special and since I did, I might as well pass on my thoughts, right? So here is my two cents about NIKKI GLASER: GOOD CLEAN FILTH.

So, I had this in front of me for three reasons; I had the time to watch it, I usually watch HBO stand-up anyway when they offer it and I knew so little about Nikki Glaser, I’d let her introduce herself to me via this routine. The only thing I knew about this gal was that she hosts HBO Max’s FBOY ISLAND and that is only because I report it as a part of my job here, not because I watch it. Well, I know a quite a bit more about Glasner now, including all about her intimate body parts thanks to this. 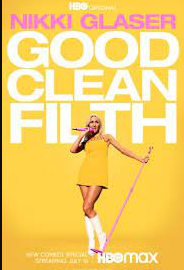 Nikki Glaser is not suitable for just anybody, but the crowd in Denver sure got into her. Hell, the way she talks of her sex life here some of them probably did – get it? She talks about her vulva at length and that’s like the opening bit. She, like so many, mistakenly call it ‘vagina’ when they really mean ‘vulva’. Which is kind of ironic because she comes across rather strongly in this hour as a sex educator, yet she makes that error. When it comes to sex she covers a lot, from handwork to anal sex; she even goes through some basic principles for preparing for the latter practice.

She is not however doing all of it for shock value. Because of what’s been said over the years it is pretty hard to shock audiences anymore anyway. This is not directly, though certainly indirectly for some, her method. We know this for a couple of reasons. Nikki G. comes right out with the notion that she is out to educate. Comedians, especially as of late, offer up something about themselves in their shtick and audiences can learn from their observances and life lessons. Glasner is out to educate women about good sex, she wants to be a sex educator onstage. She feels empowered to do so, because it’s from-the-heart honesty and her way of ensuring misinformation about such matters gets squelched. To me, all that in itself was a joke.

The other reason is that Nikki Glaser is quite adept at her craft. I saw it is just one special. She is not one to set up a joke then pause before a punchline. Oh no, she carefully crafts her words just so and does it in a way that is fluid and effortless. She uses asides and softer mumblings instead and they catch you and tag the joke just right. That takes skill and she has it. She also has some solid declarative moments about relationships and human nature. She goes off on older men preying on younger women with ‘old souls’, whatever that 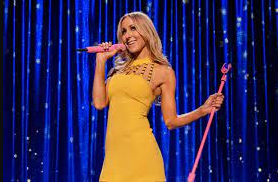 means; which is another one of her points. It is as if she was not talking this shit to get a laugh, but doing the jokes to make these statements and it worked for the most part.

To end her set she talks about being ready for a permanent relationship. But she just revealed a lot about herself and it was mostly all about sex, sex and more good sex. To me, unless it is all a persona, she is obsessed with sex. Yes, I just praised her for the strong statements she made, but they were all overshadowed by how to give a perfect handjob and how to deflate a guy. Sorry to say, but to me, you are coming across as pretty shallow and by your own admittance, gross. You are coming across as someone I wouldn’t want to be in a relationship with. But I would chuckle at least, at an hour of your stand-up!

Dare to check out NIKKI GLASER: CLEAN DIRTY FILTH? I just debuted on HBO and is on HB) Max. If you watch it come back and tell me if my opinion matches yours or not.