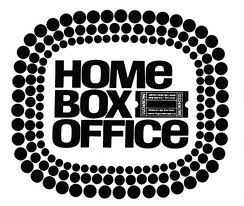 Last Fall HBOWatch launched a new category onsite dedicated to the HBO Classics. It kicked off with a look at the long-running show TALES FROM THE CRYPT. Since then we have also looked at such programming as HBO Holiday programming; ROME and even FRAGGLE ROCK. This writer now returns back to the archives to look at an older series that seems apropos to discuss this time of year. It is 1ST & TEN.

It is football season and everyone has their favorite teams and players. HBO sort of had one also. The team was the California Bulls. Does anyone here remember them? I do. They were the focal point of an early HBO comedy series that lasted six seasons encompassing eighty episodes total. Let’s take a look. The show starring Delta Burke and Reid Shelton (pictured) premiered in December 1984 and aired through January 1991. Though not the first series on HBO it was the first comedy series to air. It offered something broadcast TV could not – strong language and partial nudity. 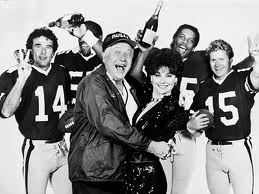 I’d love to show you a clip and I will but they are not the greatest of quality nor are the majority of them from the original airings; most of them are edited portions from when the show went into syndication. The “Complete Collection” DVD is actually copies of the syndicated run. Here is the best clip from 1ST& TEN I could locate or was allowed to embed.

The premise of the show has Diane Barrow (Burke) becoming the owner of her ex-husbands professional football team as part of a divorce settlement. The separation was due to his affair with the team’s tight end. The Bull’s have trouble dealing with a female owner of course. As Season One’s thirteen episodes play out the staff and team get into all sorts of trouble on and off the field. One of the big story arcs of the premiere season is the entanglement the organization has with the mob. Apparently the General Manager is a mobster and the nephew of Barrow’s ex. He decides to bribe officials and throw games and, of course, by season’s end the plot is thwarted. Also happening is dealing with debauchery with the cheerleaders and Miss Barrow stepping in as coach when Coach Ernie Denardo( Sheldon) ends up in the hospital. 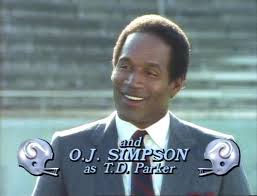 Everyone is familiar with the shenanigans by the time Season Two kicks off but some new faces were added. Most notable was O. J. Simpson as T. D. Parker, a former player since made a Bulls coach. Also on the squad was John Kassir, who was also the voice of HBO’s CryptKeeper, who plays an Eastern European player 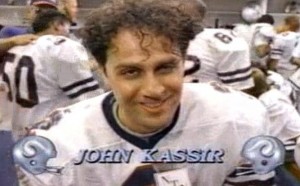 named Zagreb and Jason Beghe was the new quarterback Tom Yinessa. Season Two showed the organization going through training camp where Miss Barrow had to deal with the players taking recreational drugs and the back half of the season had the California Bulls heading to the playoffs. Also by the sophomore run actual football stars were making cameo appearances. Anyone remember Marcus Allen or Vince Ferragamo?

Big changes started in Season Three when Delta Burke left the show for Designing Women on CBS. The season had plenty going on with Miss Barrow’s former lover Teddy Schraeder who wrests control of the team from her early in the season. He doesn’t stay long and ends up leaving the ball club to his daughter played by Leah Ayres. In another storyline John Matuzak’s character in pumped up on steroids. The show rapidly spins out of control as Season Four begins It was subtitled THE BULLS MEAN BUSINESS and Shanna reed is now the lady in charge as the Bulls are bought by a corporation. She makes bold changes to the team when she hires a female soccer player as the kicker and an Olympic sprinter as a wide receiver. Joe Namath cameos in this season. 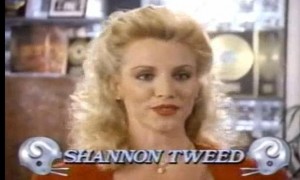 Season Five (subtitled DO IT AGAIN) had Shannon Tweed as the big boss lady and she was just that through the final season 1ST AND TEN: IN YOUR FACE.  Sadly, that is all I got except for some final trivial facts.

** The football footage used in the show was of the USFL Los Angeles Express. Actual games of that short lived league were used and the fictional Bulls wore the same numbers and uniforms to match the footage.

** The HBO series was a 30 minute show but by the time it got into syndication it was censored and edited down to 22 minutes and a laugh track was added. 1ST AND TEN: The Complete Collection DVD can be [amazon_link id=”B000BFJM5S” target=”_blank” container=”” container_class=”” ]purchased here[/amazon_link], but be warned it is the syndicated version. Hey, it is only 74 cents!

** Christopher Meloni, Sam J. Jones, Tommy “Tiny” Lister, Tony Longo and Lawrence Taylor all appeared in the series at one time or another. 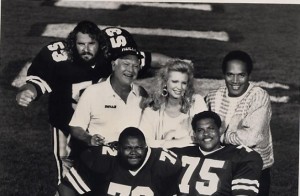 In Conclusion: I was hoping to give this dated show a big treatment with a brief one sentence description of all eighty episodes in this series. I also wanted to give you some good video clips. Sadly, that information is not available.

I hope you enjoyed this skimpy look at the first sitcom that HBO aired. Yes, it is dated, but it offered TV watchers something different. It offered coarser language and naked bouncy bosoms, beefcake and plenty of laughs for early subscribers of HBO.