What a perfect time to reminisce about HBO in seasons past. I’m going to be sharing about the early days of the pay channel. I’m talking about when HBO was just one channel with all its programming concentrated in one place. There were no HBO FAMILY or HBO COMEDY channels. There actually seemed to me more variety back then but, that could just be because the programming offered now is so spread out over all the HBO channels. Whatever the case may be one time of year that offered a richness of entertainment was during the Holidays. Of course, all the perennial favorites of our youth were watched without fail and that included some pieces that were on Home Box Office. 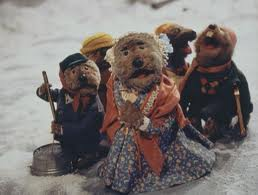 Hmm, where to start? How about EMMET OTTER’S JUG BAND CHRISTMAS! Our family gathered for it every year. If you don’t know about it was a musical special that aired starting in 1978, exclusively on HBO. It premiered on 12.17 of that year. It was created by the Jim Henson Company, creator of The Muppets, with music done by Paul Williams. It was a touching and fun tale with cute puppet animals offering a message about the love of family and Christmas. The plot is as follows:

Emmet Otter and his Ma, a widow, scrapes by on the small amount of money she gets from doing laundry and that Emmet gets from doing odd jobs around their home of Frogtown Hollow, despite both of them often being cheated. As Christmas  approaches, they hear of a talent contest  in the nearby town of Waterville, and separately decide to enter to buy nice presents for each other—a nice guitar  for Emmet, or a piano  for Ma. However, in a twist on  “The Gift Of The Magi,” they must sacrifice each other’s livelihood for the talent contest. Ma  hocks Emmet’s tools for dress fabric, while Emmet turns Ma’s washtub into a washtub bass for a jug band.

Emmet and Ma each do an excellent job (despite Emmet’s jug band having to frantically change songs after another contestant performs their song, “Bar-b-que”), only to be defeated at the last minute by a rock and roll band called The Riverbottom Nightmare Band, which comprises a hoodlum gang  from the fairly distant town of River Bottom made up of Chuck Stoat, Fred Lizard, Howard Snake, “Pop-Eyed” Catfish, and Stanley Weasel. However, as Ma and Emmet’s jug band sing a song together on the way home (more accurately, both of their talent show songs together after Ma realized they fit together), they are overheard by Doc Bullfrog, owner of a local restaurant, who hires them to sing for his customers, thus granting them the bigger prize. They surely would make money to get each other presents but, more importantly, they offer others their gift of song. It is truly a cute film with beautiful music and can be found nowadays on DVD but it got its start on HBO.

Here is one of the numbers from the show “Ain’t No Hole in the Washtub.”

Also, as an extra Holiday gift here is even an outtake clip.

Next up, is another seasonal treat that I recall seeing on HBO and nowhere else since. It aired every December for a few years beginning in 1981. It is called RED SKELTON PRESENTS FREDDY THE FREELOADER’S CHRISTMAS DINNER. It ran under the comedy series HBO called STANDING ROOM ONLY:

Red Skelton was a penultimate comedic talent with a background in clowning and pantomime. One of his classic characters was Fre 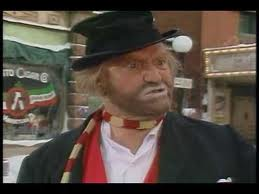 ddie the Freeloader who is a hobo clown.  To describe the character you could say that Freddie is perpetually broke, yet perpetually happy, sure that his next meal is right around the corner. In this special Freddie, who has been saving up his money to afford a nice Christmas dinner with his friend, The Professor, played by Vincent Price. However, Freddie first has to find the Professor, leading to a variety of encounters, first with Molly, a bag lady played by the Imogene Coca. After a funny, and bittersweet, encounter, Freddie continues looking for the Professor, including a visit at a hospital where he’s put upon to entertain some children who are there over the Christmas holiday. Eventually Freddie tracks down the Professor at the city jail, where he has to bail him out. With only enough money in his pocket to either eat at a fine meal, which he set out to do in the first place or bail out his friend he, of course, helps his friend in need. By show’s end he accomplishes his goal of not only dining at a fine restaurant but including his friends to enjoy the Christmas feast.

It was a delightful entertainment and the last appearance of Red Skelton on TV and a nice Holiday memory from HBO.  Oh, and look here, you can watch it on YouTube in segments.

Another fun and comedic Yuletid 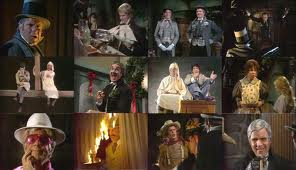 e treat was RICH LITTLE’S A CHRISTMAS CAROL. I remember chuckling over this one. It first aired in 1978 and can also be found on YouTube. In it the master impressionist, who had appeared in a number of comedy specials in HBO’s early days, plays all the characters in a telling of Charles Dicken’s classic story using famous personas to fill all the parts. It was a one-man tour de force. I certainly don’t need to give you the plot but, here is a rundown of the cast list. Remember, they are all played by Rich Little. Ebenezer Scrooge was played via W. C. Fields, Bob Cratchit via Paul Lynde, Jacob Marley via Richard Nixon, the Ghost of Christmas Past via Humphrey Bogart, The Ghost of Christmas Present via Peter Falk’s Columbo and The Ghost of Yet-To-Come via Peter Sellers Clouseau.

Other roles are Mr. Fezziwig via Groucho Marx, Dick Wilkins via Jimmy Stewert, Mrs. Cratchit via Jean Stapleton’s Edith Bunker, Tiny Tim via Truman Capote, Nephew Fred via Johnny Carson, Little boy on Christmas morning via Jack Benny the Charity Solicitors via Stan Laurel & Oliver Hardy and the three businessmen gloating over Scrooge’s death are via James Mason, George Burns and John Wayne. Below is just a snippet with the three businessmen.

Last but not least there is the CHRISTMAS AT RADIO CITY MUSIC HALL. Of, course, that theater and its famed Rockettes stage a Christmas show every year but in 1986 HBO filmed the show and aired it as a Holiday special. An old weathered VHS tape of that show is still viewed by my elderly father 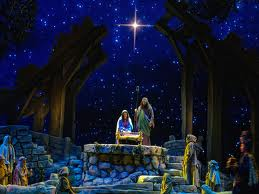 Joel Grey was host for the filmed version of the yearly spectacle. The show features the precision dancing of the stunning Rockettes in a few different numbers including The Dance of the Wooden Soldiers, plus comic bits featuring Santa Claus, elves and children and feature performances by Leslie Uggams and Peggy Fleming & Robin Cousins on ice. Also being staged is the Living Nativity including live animals down the aisles.

This HBO CLASSICS post leaves you with a Rockettes routine. Though this bit was in the HBO special this clip is not from the ’86 program nor is it the entire dance but it gives you an idea of the amazing talent that my father and people who watched classic HBO got to witness. 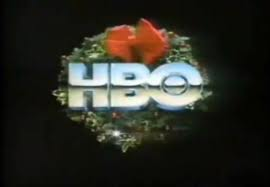