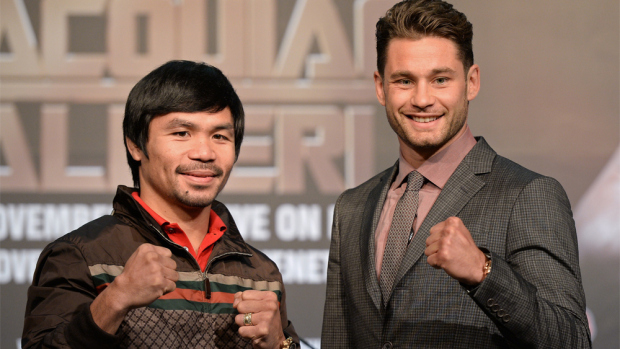 This week fight fans will need to shell out a bit more to the cable company to follow the sport. Saturday night brings us the next fight from the Filipino sensation, Manny Pacquiao.  The fight will be broadcast on HBO pay-per-view starting at 9pm eastern time. Many of you might be thinking who is Chris Algieri and why would I pay an extra $60 to see him fight one of the world’s most famous and talented fighters? Pacquiao is an offensive dynamo exhibiting expert ring technique, blazing hand speed and enough pop in his punches to put opponents to sleep. Chris Algieri got a severely damaged eye to go with a gift decision last summer against the Siberian Rocky, Ruslan Provodnikov, a fearsome, but relatively immobile brawler. Algieri has solid fundamental boxing skills but couldn’t crack an egg with his punch.  The reason enough people will shell out the extra money to see this fight is that for a boxing fan, you just can’t miss when the highest-level practitioners are fighting no matter who the opponent is.

Generally speaking, there is always the chance that it will turn into a fight of the year with both men trading vicious punches and exercising their will to win.  More likely is that any given fight will be a slow, drawn-out affair, devoid of drama while one or both fighters avoid engagement and are just happy to show up and collect their sizable paychecks.  In all likelihood, Algieri will attempt the same strategy that got him a lucky victory against Provodnikov and stay busy with his hands without doing any damage and run like a gold medalist.  Unfortunately for Chris, Manny Pacquiao is the type of fighter that forces a fight and has the skills to make an opponent fight his kind of fight and look good doing it, putting on a good show in every single fight which is incredibly rare.  If Pacquiao wins, expect to hear the never-ending drumbeat for a fight with Floyd Mayweather to get even louder.  If you don’t have the cash to cough up, wait a week and see the replay on regular HBO next Saturday.